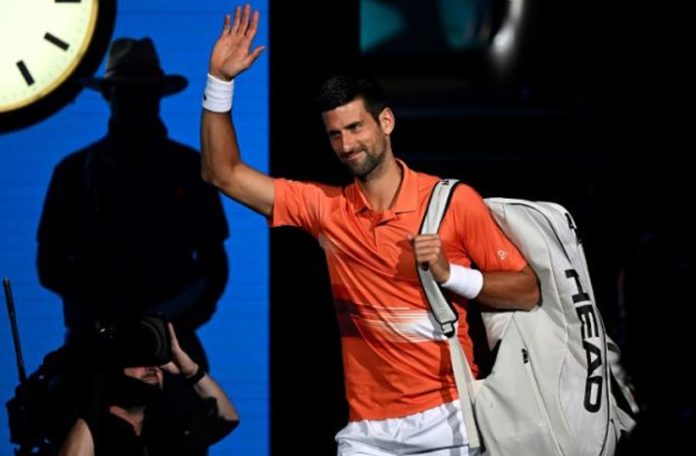 MELBOURNE: Novak Djokovic was “a bit emotional” after receiving a warm welcome Friday on his return to Melbourne Park, before facing Nick Kyrgios in a sell-out Australian Open exhibition match.

All 15,000 seats at Rod Laver Arena sold out in 58 minutes, with proceeds going to charity, ahead of the first Grand Slam of the year on Monday.

Djokovic, who was deported a year ago, was given a good reception when he went on to win an Adelaide warm-up tournament last week and it was a similar story at Rod Laver Arena, where he is a nine-time champion.

“Thank you so much, feel a bit emotional right now to be honest,” the former world number one from Serbia told the crowd after his entrance on court was met by cheers and applause.

“I was really looking forward to coming back to this court, so thank you all you guys for coming out tonight for a great cause,” said the 35-year-old, one of the best men’s tennis players of all time.

Djokovic has dominated the Australian Open since his maiden triumph in 2008 but he had his visa cancelled 12 months ago and was deported on the eve of the tournament because of his stance on Covid vaccines.

In a light-hearted encounter against Australia’s Kyrgios, Djokovic wore tape for a left hamstring issue which saw him curtail a practice match against Daniil Medvedev this week.

But he appeared to have no trouble with his movement against Kyrgios and said beforehand that he was “feeling good”. Kyrgios also allayed concerns about an ankle injury which has hampered his preparations.

They each won one shortened set before concluding the friendly knockabout with a tiebreak that also included wheelchair players David Wagner and Heath Davidson.

Djokovic and temperamental showman Kyrgios used to have a frosty relationship.

But that has thawed considerably after Kyrgios became one of the few players to come out publicly and support Djokovic as he unsuccessfully fought deportation in January 2022.

They met in the Wimbledon final last year, with Djokovic winning in four sets for his 21st Grand Slam.

He is hot favourite to win the Melbourne title once again when he begins his campaign against 75th-ranked Spaniard Roberto Carballes Baena.

“This is the court and the stadium where I created the best memories of my professional career.”