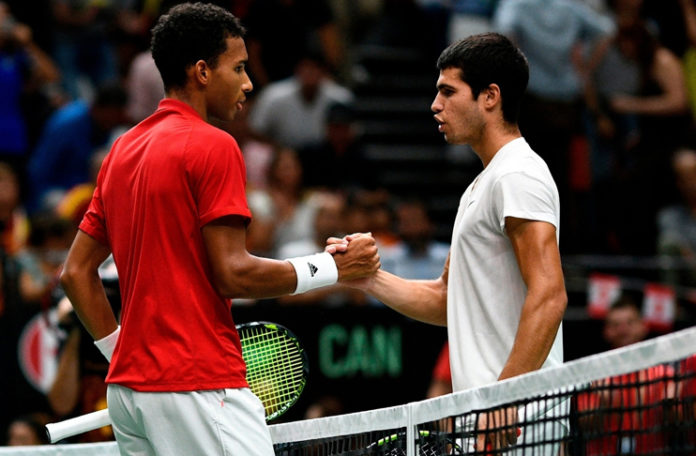 VALENCIA: Carlos Alcaraz, the youngest men’s tennis world number one in history at 19 after his US Open triumph last week, had a bittersweet homecoming as he lost to Felix Auger-Aliassime defeated 6-7 (3/7), 6-4, 6-2 in the Davis Cup in Valencia on Friday.

Given an ovation by fervent home support after his first Grand Slam conquest on Saturday, the Spaniard and his Canadian opponent played out a thrilling second singles rubber, with Canada levelling the tie at 1-1.

Alcaraz, from nearby Murcia, had watched from the sidelines on Wednesday as Spain beat Serbia 3-0.

On Friday, he was neck and neck with his Canadian opponent through the first set as both players served strongly.

The Canadian was particularly unforgiving, hitting seven aces in the first set and winning 79 percent of his service points, yet Alcaraz battled back every time to force a tie-break.

In the tiebreak, Auger-Aliassime earned a mini-break to take the lead but the persistent Spaniard turned it around and clinched the set with a fierce forehand drive down the line.

The second set was brilliantly and evenly contested too, until Auger-Aliassime broke to move 5-4 up. He then served out.

In the third, Alcaraz tired, perhaps unsurprisingly after his marathon matches in New York, and world number 13 Auger-Aliassime broke straight away and then again to go 4-1 ahead, holding off the Spaniard despite strong encouragement from the crowd.

READ: ‘Rizwan only plays on leg side, he’ll be trapped’ claims Moin Khan