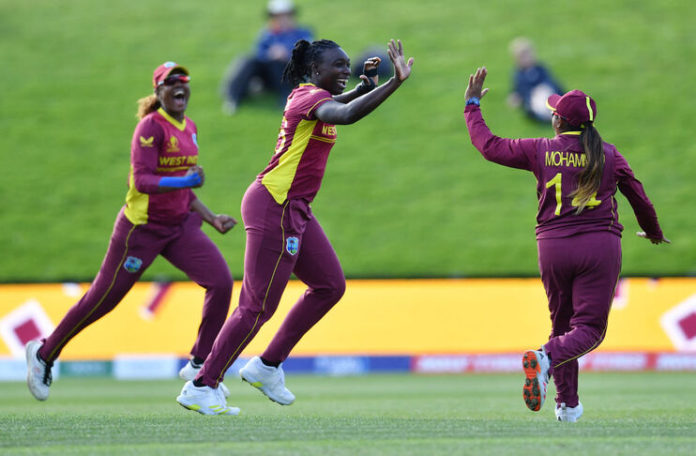 DUNEDIN: West Indies’ wicket-keeper batter Shemaine Campbelle shone with her magnificent 66-runs knock before the bowlers displayed combined effort to propel their side to a second consecutive victory in the ongoing ICC Women’s World Cup, here on Wednesday.

Batting first in the seventh match of the mega event, West Indies managed to post a reputable 225/6 in the allotted 50 overs, thanks to Campbelle, who top-scored for the side with her brilliant knock of 66. She faced 80 deliveries and smashed four boundaries.

Chedean Nation, on the other hand, who also chipped in with her 49, partnered strongly with Campbelle for the fifth wicket as the side were four down for a combined score of 98 in the 27th over.

The pair put on an important 123-runs partnership and powered their side to a commendable total. Nation remained not out as she scored 49 off 74 balls with the help of three boundaries.

West Indian opener Hayley Matthews, on the other hand, also played an important knock of 45 runs before walking back to the pavilion in the 21st over. She recorded a brilliant 81-runs opening partnership with Deandra Dottin, who scored 31 off 64 balls.

For England, Sophie Ecclestone bagged three wickets, while Nat Sciver made one scalp.

Set to chase 226, the former champions England fell just seven short of pulling off the victory.

In the run chase, England were off to an unwanted start as they lost half of their side at a combined score of 94 and Tammy Beaumont, who was ticking the scoreboard singlehandedly was the latest blow to the former champions.

With the side struggling at 94/5, Danni Wyatt and Sophia Dunkley showed resistance and thrive to pull things back to their side’s favour.

The pair put on an important 60-runs partnership for the sixth wicket and almost brought England back into the game before Stafanie Taylor removed Dunkley for 38 in the 34th over.

Following Dunkley’s departure, Danni also made her way back to the pavilion in the next over Shamilia Connell dismissed the former for 33.

The side then ran into another collapse and in the end, bowled out on 218. Ecclestone remained not out with her gritty 33 but could not power her side to the victory.

For West Indies, Connell led the way with three wickets, while Matthews and Anisa Mohammed took two each. Aaliya Allenyne and Taylor, on the other hand, struck out a batter each.

READ: PAK vs AUS: Players to reach Karachi tomorrow for the second Test