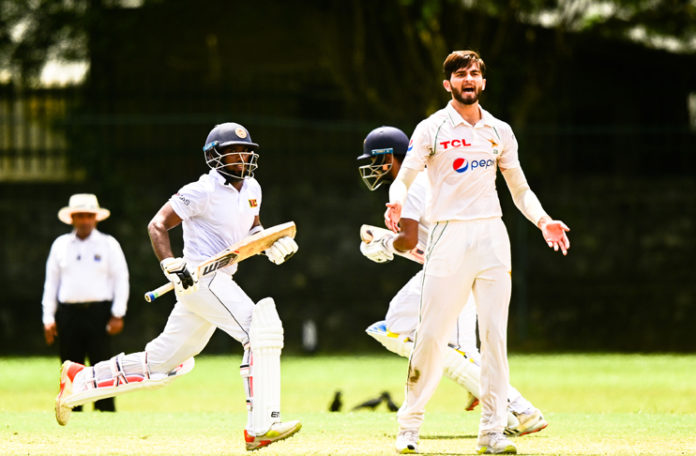 COLOMBO: Sri Lanka XI opener Sadeera Samarawickrama and Nuwanidu Fernando tested Pakistan bowlers with magnificent half-centuries and bolstered their side to finish at 278/5 on the second day of the ongoing three-day warm-up match.

On the second day, Pakistan resumed at 277/7 and could only manage to add 46 runs to their overnight score despite a gritty knock from Salman Ali Agha, who scored 55 off 79 balls, laced with three boundaries.

Pakistan captain Babar Azam remained the top scorer for the touring side with an astonishing knock of 88 runs. Whereas, Azhar Ali chipped in with 43.

For Sri Lanka XI, Lakshitha Manasinghe led the way with four wickets, while Dilshan Madushanka and Lasith Embuldeniya bagged two each. Udith Madushan, on the other hand, made one scalp.

In response to Pakistan’s decent total of 323, Sri Lanka XI batters provided a solid start to their team with an astounding 158-run opening stand and tested Pakistan bowlers.

Right-handed batter Samarawickrama was the main contributor to the magnificent stand as he scored 91 at a decent strike rate. He faced 99 deliveries and smashed 13 boundaries before Agha put on an end to his inning.

The young side then lost two quick wickets as captain Nipun Dhananjaya and wicketkeeper batter Lahiru Udara walked back to the pavilion in quick successions. Dhananjay and Udara could score 14 and four respectively.

Top-order batter Fernando then joined hands with Sahan Arachchige and put on an important 58-run partnership and anchored their side’s position in the match.

Returning leg-spinner Yasir Shah then broke the important partnership as he removed Fernando by trapping him in his legs. He scored 78 off 177 deliveries with the help of four boundaries and a six.

Young right-arm pacer Naseem Shah then struck in the next over and castled Arachchige on 28.

With half of their side back in the pavilion, opening batter Madushka and Chamika Karunaratne then added an important 30 runs at the conclusion of the second day and bolstered Sri Lanka XI to finish on 278-5.

Madushka (39*) and Karunaratne (14*) will now resume the proceedings for the home side with a 45-run deficit on the final day of the warm-up match.

READ: Virat Kohli ruled out of first ODI against England