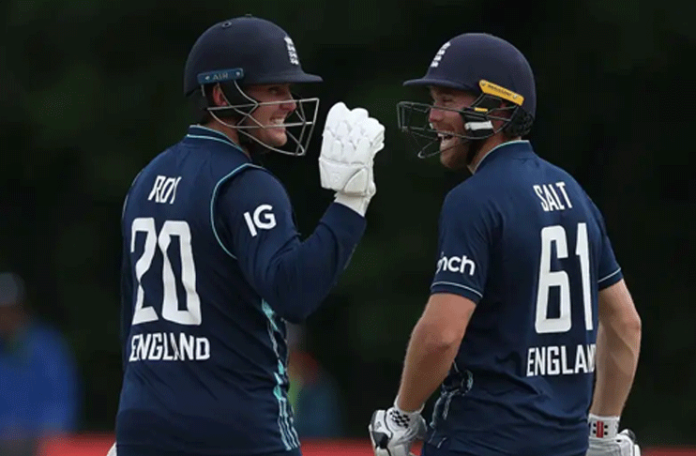 AMSTELVEEN: Openers Jason Roy and Phil Salt led the charge for England to take their side to a comfortable victory by six wickets against the Netherlands in the rain-hit second ODI, taking an unassailable 2-0 lead in the series, here on Sunday.

Set to chase 236 runs, England batters completely dominated the opposition in a match reduced to 41 overs-per-side as wet outfield delayed the start by nearly three hours.

After scoring the highest ODI total in the previous game, the energetic England side came out on the crease with a similar force, bringing up 100 runs in the 15th over.

Roy, who fell cheaply in the last game, joined the party this time as he glittered with a powerful 73 runs knock, laced with 13 fours and a six. Whereas, Salt blasted 77 off 54 including 9 boundaries.

England skipper Eoin Morgan, continued with his dismal form when he was dismissed on a duck for the second time in the series. Meanwhile, Liam Livingstone failed to impress this time as he was bowled out by Tim Pringle cheaply.

The left-handed duo of Dawid Malan and Moeen Ali, however, crushed the Dutch bowlers again after a hiccup in middle and took their side home with the blistering knocks of 36 and 42, respectively.

Opting to bat first after winning the toss, the Dutch side set a total of 235 with skipper Scott Edwards leading the way for his team with a brilliant 78 off 73 deliveries.

Teja Nidamanuru joined Edwards to raise a firm fifth-wicket partnership of 73 runs when the hosts were suffering at 97/4. Logan van Beek put up a steady knock after David Willey bowled out Nidamauru and also got rid of Edwards through run out. Shane Snater played a cameo of unbeaten 17 off 10 balls.

England now have an unassailable 2-0 lead in the three-match ODI series against the hosts while the dead rubber match will be played on Wednesday.