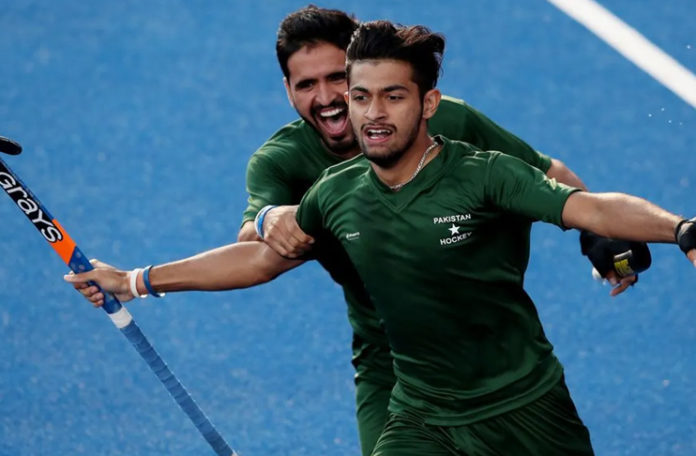 BIRMINGHAM: National Hockey team achieved their first win in the Commonwealth Games journey as they defeated Scotland 3-2 in the Pool A match of the men’s hockey event, creating a ray of hope to qualify for the semifinals.

Rooman netted the ball just six minutes before the final whistle to steer the green shirts to victory, before Afraz Hussain and Abdul Shahid contributed with a goal each.

Scotland dominated the first quarter of the game as they earned their first penalty in the 10th minute. Robert Field was quick to react to play the ball across the area after Jamie Golden’s shot was saved, and Cammy Golden volleyed the ball into the nets to score the opening goal.

The Scots well-coordinated defence effectively neutralized Pakistan’s strong response in the remainder of the quarter.

However, in the second quarter, Pakistan attacked with more vigorous efforts and levelled the lead after 22 minutes when Afraz beat Tommy Alexander with an unstoppable shot on the turn and the goalkeeper was helpless to stop it.

Within a minute Shahid netted the ball to make it 2-1 and put his side in lead at half-time.

Struan Walker scored the equaliser in the 38th minute after both teams exchanged a flurry of attack and defence moves in the thrilling second half.

Scotland started the final quarter with a new zeal and showed fabulous attack skills however Pakistan blocked their efforts to keep the score 2-2.

However, Rooman retaliated in the 55th minute when he received a pass into the D and his shot went off the crossbar and over the goal line to make it 3-2.

With the win, Pakistan are now ranked fourth with four points in pool A with  South Africa sitting in second and New Zealand in third with the same number of points.

Pakistan will now take on pool leader Australia in their final game on August 4.