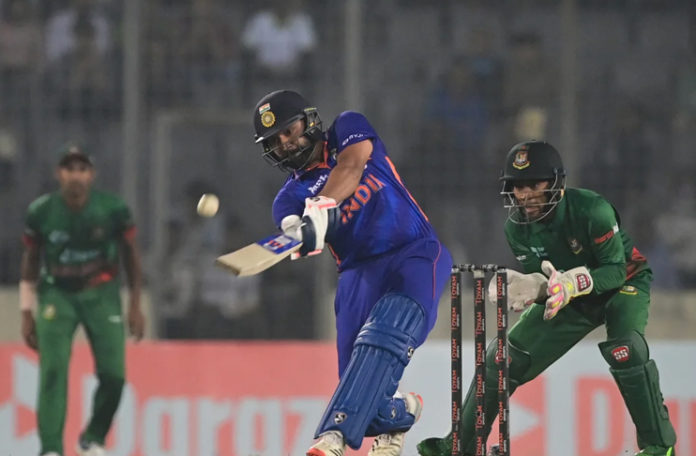 MIRPUR: Indian captain Rohit Sharma’s fighting knock with an injured thumb went in vain as Bangladesh held their nerves calm to win the last ball-thriller and clinched the ODI series 2-0 with one match to spare.

Set to chase 272, India fell five runs short despite a fighting knock from their captain Rohit, who produced a quickfire 51-run knock in just 28 deliveries, laced with three boundaries and five sixes.

Earlier in the first innings, Rohit injured his hand while taking a catch and went off the field for scans and was later seen in the pavilion with a bandaged thumb.

At one point, India were comfortably cruising in pursuit of the run chase during the fifth wicket partnership between Shreyas Iyer and Axar Patel as they added 107 runs at a decent rate.

The duo appeared solid –both scoring half-centuries — seemed to have taken the game away from the hosts’ grasp before their hero Mehidy Hasan Miraz struck to break the crucial partnership.

Two setbacks in quick successions including their set batter Patel rocked India’s pursuit as they slipped to 207/7 in the 43rd over.

Following the slump, injured Indian captain Rohit displayed sheer grit as he walked out to bat for his side with an injured thumb.

The right-handed batter defied the odds as he produced fireworks; scoring a quickfire fifty to keep his side in the hunt.

His heroics, however, turned out to be insufficient in the end as Bangladesh ran away with a narrow five-run victory to take an unassailable 2-0 lead in the three-match series.

Iyer remained the top-scorer for India with a cautious 82-run knock, while Patel scored a run-a-ball 56. The rest of the Indian batters failed to contribute significantly in the run chase.

Batting first, Bangladesh managed to amass 271/7 at the back of an astounding century from Miraz.

The home side were off to a dismal start as they were 69/6 in the 19th over before Mahmudullah and Miraz took charge and turned the game on its head with a magnificent partnership.

The duo waived off the threat from the Indian bowling attack and scripted an astounding counterattack; adding 148 runs for the seventh wicket before Mahmudullah perished.

The right-handed batter scored a valiant 77 off 96 balls with the help of seven boundaries.

Despite his dismissal, Miraz stood firm and kept the scoreboard ticking with some help from tailender Nasum Ahmed (18).

He then went on to smash his second ODI century as he remained unbeaten on 100 off just 83 deliveries including eight boundaries and four sixes.