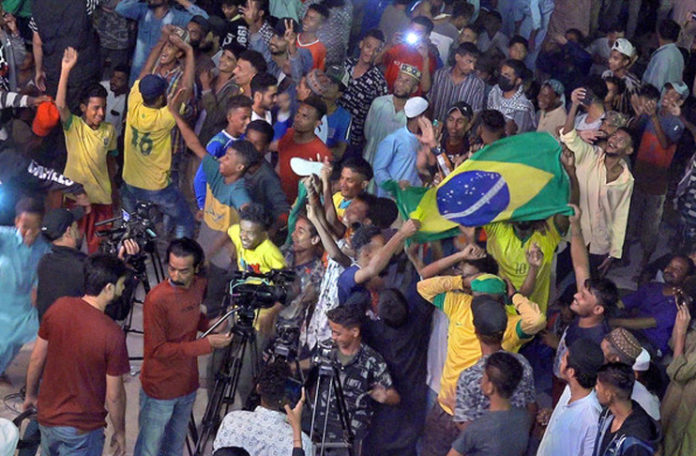 KARACHI: The football craze and immense support for Brazil’s football team in Lyari managed to draw the Brazilian media’s attention as their local channel “TV Brasil” reported from the football-enthusiast neighbourhood.

Lyari, which is also known as “Mini Brazil” remains in the spotlight for their love for Brazilian football and the locals always gather in large numbers to watch the matches of their favourite team in the ongoing FIFA World Cup 2022.

The football-crazed neighbourhood presents scenes like a carnival during the world cup as the locals paint the flags of the nations participating in the world cup and hold live screenings of the matches.

They came out in large numbers to watch the matches live wearing Brazil’s jersey and carrying the country’s flag, followed by fireworks on their favourite team’s triumph.

Such massive affection from the neighbourhood has drawn the attention of Brazilian media as their local channel TV Brasil’s show “Reporter Brasil” made a package on the locality.

Taking to Twitter, the media channel also shared the package and acknowledged Lyari as Mini Brazil.

“We think of Brazil, we think of football. And that’s why a small neighbourhood in Pakistan, where the World Cup is as exciting as it is here in our country, was nicknamed ‘mini Brazil’. And there are fans of our national team there,” Reporter Brasil wrote.

It is pertinent to mention that Brazil handed a crushing 4-1 defeat to South Korea and qualified for the quarter-finals. Tite’s side will now take on previous world cup runners-up Croatia on Friday.