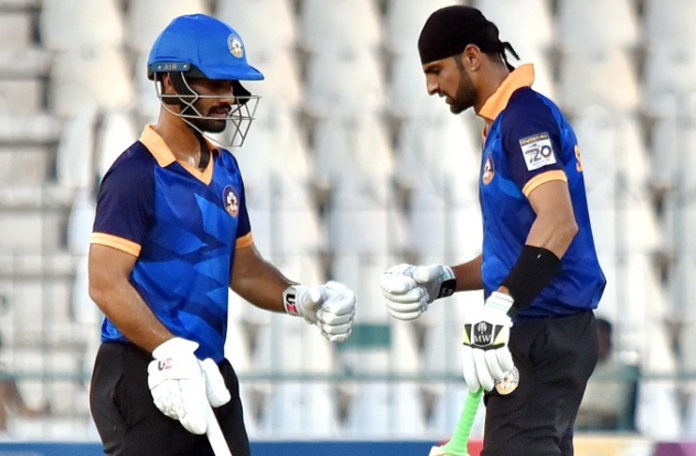 MULTAN: Central Punjab (CP) captain Qasim Akram and veteran batter Shoaib Malik led the charge in their final group stage encounter of the ongoing National T20 Cup 2022 against Northern with a fifty each, helping the side finish third in the standings.

Set to chase 163, the fifties from Qasim and Shoaib powered CP to seal a much-needed victory to finish the group stage of the tournament on a high after a dismal start.

The CP were off to a poor start to the run chase as the side lost both openers Faizan Khan and Muhammad Akhlaq at a mere 33 in the fifth over.

Top-order batter Tayyab Tahir, who had a remarkable tournament thus far, kept scoring at a rapid pace but failed short at the cusp of the batting powerplay as he fell to Salman Irshad for 23.

Following the slump, Shoaib and Qasim stood up for their side and put on a match-defining 100-run partnership for the fourth wicket.

The pair appeared solid and were looking confident to steer the CP over the line before Zaman Khan struck in the 18th over to remove Qasim for 58. He faced 37 deliveries in the course of his brilliant knock and smashed eight boundaries.

Right-handed experienced batter Shoaib, on the other hand, remained unbeaten and top-scored for the side with 62 off 39 deliveries, laced with six boundaries and two sixes.

For Northern, Mehran Mumtaz, Sohail Tanvir, Zaman, and Salman made one scalp each.

Batting first, Norther finished at a below-par 162/5 in the allotted 20 overs despite a magnificent knock from the opening batter Nasir Nawaz. He top-scored for the side with 82 off 57 deliveries, laced with six boundaries and four sixes.

Besides Nasir, none of the Northern batters could contribute significantly and the side, as a result, failed to amass a massive score. Skipper Umar Amin chipped in with 31 but remained a touch too slow as he faced 29 deliveries in the proceedings.

For CP, Aamer Yamin led the way with three wickets, while Hunain Shah and Faizan Khan struck out a batter each.