Home Cricket ‘It is a part of the game’ Babar backs struggling Rizwan for...
Facebook
Twitter
WhatsApp
Email
Telegram 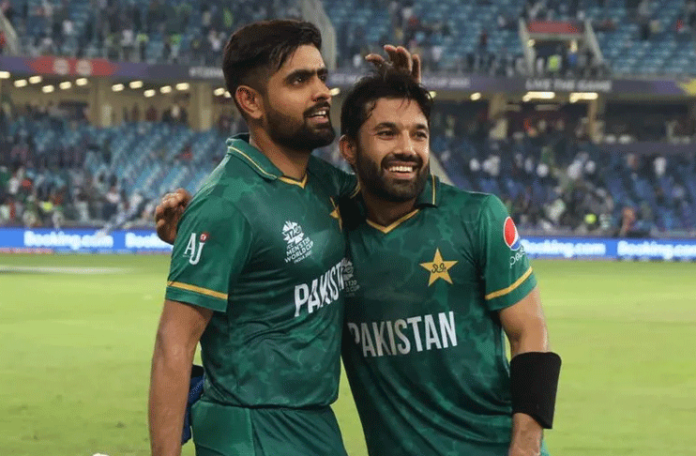 Babar interacted with the media ahead of the team’s scheduled training camp for the West Indies series and opined regarding Rizwan, who is struggling to get going in the ODI format.

“Form is temporary in cricket and I think it is a part of the game. Rizwan is our important player and supports me in challenging times,” Babar stated.

Rizwan is currently going through a rough patch in the ODIs as the right-handed batter could only manage to score 192 runs in his last 11 matches since 2020 with a dismal average of 17.45.

Babar, on the other hand, further opined about the upcoming series and expressed his delight in playing without a managed environment after 2020.

“We are going to play cricket in a normal environment after a very long time, which is a great pleasure for us,” Babar said.

“We are very happy and excited for the commencement of the camp. We’ll be playing in Multan after a long period and it is delightful for us,” he added.

“It is very hot there but we are ready to accept the challenge. We’ll be holding the camp at 2 PM in order to tackle the extreme weather,” he maintained.

While talking about the preparations for the forthcoming series, Babar claimed that he is aiming for the upcoming ICC Men’s World Cup 2023 and is looking to prepare accordingly.

“We have the 2023 World Cup in mind and we are preparing for it. This series is very important for us as it is a part of the World Cup Super League,” he said.

“We do not consider any team as an easy opponent as every team takes the field with full preparations. We, ourselves, did not play international cricket for the last two months. Our players, however, were playing County Cricket in England but I think domestic cricket is different than international cricket,” Babar added.

Pakistan’s skipper further claimed himself as a fully independent captain while also emphasising the need of giving proper chances to the players and to only analyze their performances after a particular time.

“I am an independent captain while I also think that everyone has a different way of thinking,” he claimed.

It is apropos to mention here that Pakistan will take on the West Indies in a three-match ODI series. The three matches will be played on June 8, 10, and 12 respectively.

READ: Fatima shines as Pakistan bowl out Sri Lanka on 169 in the first ODI