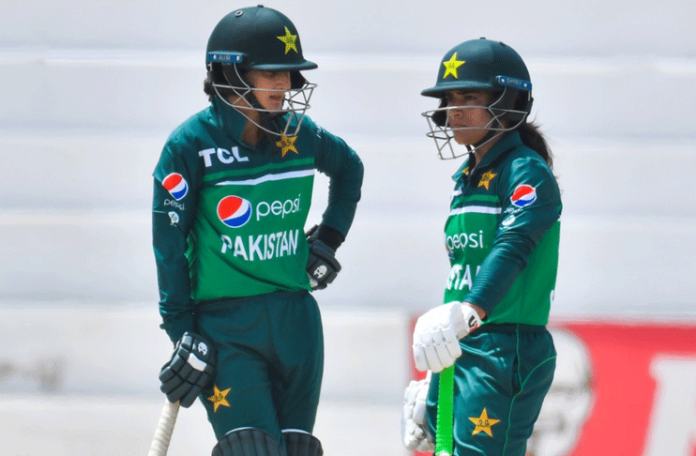 Set to chase 170, Pakistan comfortably steered to the victory in the 42nd over for the loss of just two wickets at the back of Bismah and Sidra’s half-centuries.

The Green Shirts had an unwanted start to their run chase as the side lost their first wicket for a mere 25 runs. Bismah and Sidra then anchored the run chase with a magnificent 143-run partnership for the second wicket.

Sidra, however, lost her wicket in the same over Pakistan clinched the victory as Oshadi Ranasinghe castled her for 76. She remained the top scorer for the side with her brilliant knock and smashed seven boundaries.

Bismah, on the other hand, carried her bat till the end and remained unbeaten with an astonishing 62 off 101 balls, laced with five boundaries.

After opting to bat first, Sri Lankan batters could not manage to post a commendable total on the board as Fatima’s brilliance restricted the side to 169.

Batting first, the touring side had an unwanted start as they lost three wickets for a mere 46 runs in the 16th over.

The pair appeared firm before Sadia Iqbal managed to remove de Silva in the 30th over. The right-handed batter walked back to the pavilion after scoring 16.

Following her departure, the side began to lose wickets at an alarming rate but Kavisha Dilhari displayed grit as she remained unbeaten and kept the scoreboard ticking.

The right-handed batter top-scored for the side with an unbeaten 49 off 50 balls, laced with five boundaries and a six.

For Pakistan, Fatima led the way with four wickets, while Sadia and Fatima Sana made two scalps each.