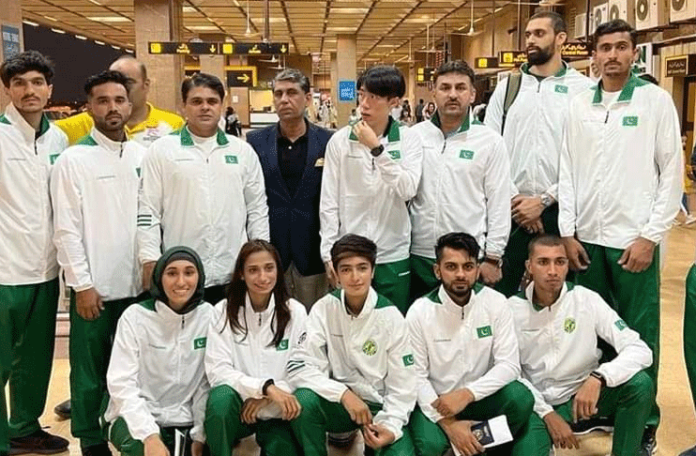 KARACHI: Pakistan Taekwondo team departed for South Korea to participate in the upcoming Taekwondo event which includes the Chechuan Open International Championship and the Asian Poomsae and Kyorugi Championships.

The fifth Den Korean Master Seong Oh Choi, on the other hand, will serve as the head coach of the three-member Poomsae squad featuring Mohammad Wasim Javed, Shahzeb Ahmed, and Flower Zaheer.

Speaking on the team’s preparations, Oh Choi claimed that the team is mentally and physically fit, while is also hopeful for his team to reach the winning stand.

“The players have trained hard for the upcoming championship in Korea. They are physically and mentally fit and will try to reach the victory stand with 100 percent performance,” Oh Choi stated.

The participating player Zaheer, on the other hand, also spoke on the departure and shared his excitement about the championships and claimed that it will help the team to improve their performance.

“Participating in international events will enhance our skills and experience,” Zaheer stated.

The President of the Pakistan Taekwondo Federation (PTF) Colonel Wasim Janjua stated that the Pakistan teams will be up against the top-performing sides of the continent but is hopeful that the 10-day training camp will help the team in the event.

“The teams participating in the event are among the best in Asia, but we are also well prepared. The experience of the 10-day training camp in Iran will be very helpful for our players in the event and I hope that our young athletes will use all their abilities to win medals for the country,” President PTF Janjua stated.