LAHORE: The Pakistan Cricket Board (PCB) has revealed the six-month expenses of the chairman Ramiz Raja, here on Saturday.

The cricket board shared the document comprising the unaudited expenses availed by the chairman Ramiz from October 2021 to 22 March 2022.

As per the document, the PCB chairman spent around four million rupees over the course of six months, with more than two million spent on domestic travel. 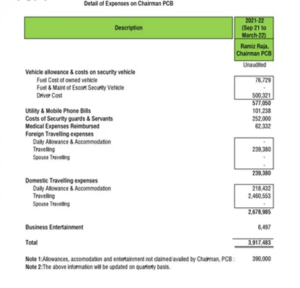 The PCB Chairman also spent over half a million on vehicle allowance, over a hundred thousand on utility and mobile allowance, and 0.25 million on personal security guards and servants.

It is apropos to mention here that this is the first instance after September 2021, that the PCB has shared the expenditure details of Ramiz. Whereas, the expenses of the former PCB chairmen used to be updated on a regular basis.