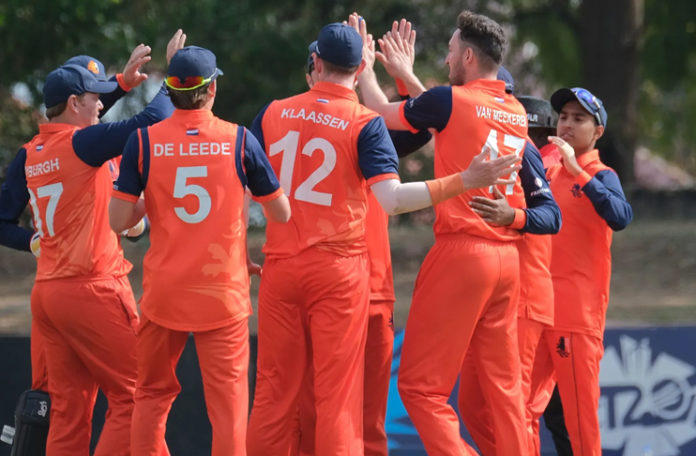 BULAWAYO: Netherlands and Zimbabwe have qualified for the forthcoming ICC T20 World Cup 2022 after edging past Papa New Guinea (PNG) and the United States of America (USA) respectively in the semi-finals of the ICC Men’s T20 World Cup Qualifier B.

In the respective semi-finals of the qualifying event, the Netherlands sank the USA by seven wickets, while Zimbabwe thrashed PNG by 27 runs.

In the second semi-final, the USA were off to a decent start as the opening pair of in-form Steven Taylor and skipper Monank Patel laid a solid foundation with a 51-run stand.

The pair lit the hopes of their side to make their first global ICC tournament before Paul van Meekeren provided the first breakthrough to the Netherlands as he removed Taylor for 26 – his lowest total in the tournament.

Following Taylor’s dismissal, the side then ran into a frustrating collapse and soon bowled out for a mere 138 in the final over as the rest of the batters could not make significant contributions.

The USA skipper Monank Patel, however, remained the top-scorer for his side with a blistering knock of 32 runs off just 15 deliveries. Nisarg Patel, on the other hand, also chipped in with an important 28 down the order.

For the Netherlands, Bas de Leede and van Meekeren bagged two wickets each, while Logan van Beek and Shariz Ahmed made one scalp each.

In the run chase, the Netherlands were off to a shaky start as their opener Stephan Myburgh fell for a three-ball duck to Saurabh Netravalkar.

Max O’Dowd and de Leede then anchored the run chase after the early hiccup and batted sensibly to bolster their side to a comfortable position.

De Leede led the attack despite the Dutch losing two wickets in consecutive overs as he reached an important fifty from 33 balls. The right-handed batter then put on an unbeaten 77-run partnership with skipper Scott Edwards and assured his side the second consecutive T20 World Cup appearance.

Following his magnificent knock of 91 runs off just 67 deliveries, laced with a dozen boundaries including three sixes, the right-handed batter was adjudged as the player of the match.

Netherlands have booked their spot in the ICC Men's #T20WorldCup 2022 🤩 pic.twitter.com/lPJLQhrOCe

In the first semi-final, Zimbabwe amassed a massive total of 199/5 in the allotted 20 overs at the back of a combined effort by the batters.

Right-handed batter Wessly Madhevere top-scored for the side with a magnificent knock of 42 runs, while skipper Craig Ervine chipped in with an important 38.

For PNG, Sese Bau and Charles Amini claimed two wickets each, while Riley Hekure struck out a batter each.

Top-order batter Amini also chipped in with a 31-run knock, while the rest of the batters could not shine on the big stage and walked back to the pavilion after scoring cheaply.

For the hosts, Blessing Muzarabani led the way with two wickets, while Sean Williams, Luke Jongwe, Sikandar Raza, Madhevere, and Richard Ngarava made one scalp each.

See you in Australia, @ZimCricketv 🤩