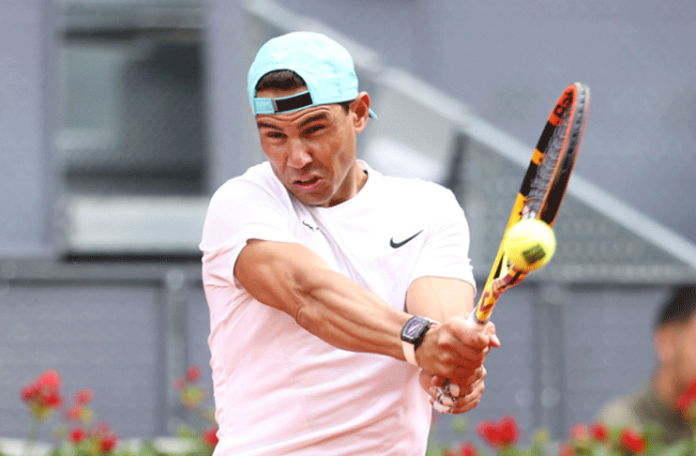 PALMA: Spanish tennis legend Rafael Nadal said on Friday he intends to play at Wimbledon but his final decision rests on how his troublesome left foot feels after training in London next week.

“My intention is to play at Wimbledon,” Nadal said at a press conference in Mallorca.

Nadal, who confirmed he was going to be a father for the first time, traveled to Barcelona last week to begin “pulsed radiofrequency stimulation”, a treatment aimed at reducing nerve pain.

Nadal’s spokesperson said the treatment would leave the nerves in his foot “temporarily numb”.

The 36-year-old then had his first session on the grass on Monday at the Mallorca Country Club in Santa Ponca and has steadily increased the intensity of his training this week.

“I have noticed a difference, some slightly strange feeling to be honest,” said Nadal.

“With the treatment in the nerves, things happen in your foot, sometimes one part of the foot goes numb, sometimes another.

“It’s normal apparently and after a few weeks, the nerves reorganize themselves.

“I’m happy. I’ve felt a bit of pain, but it’s different from what I had before, which for me is progress.”

He missed last year’s tournament due to pain in the same left foot while the 2020 tournament was canceled due to the pandemic, meaning Nadal is hoping to make his first appearance at the All England Club in three years.

“I will travel to London, play two matches there before the tournament and follow my normal schedule to prepare for Wimbledon,” Nadal said.

“Who knows what can happen in a couple of days — if the situation changes or something more negative (happens), there will be a moment to explain.

“But I am excited to travel to Wimbledon and to play for the first time in three years.”

He said his plan is to “play Wimbledon, rest, then Canada and then the US Open.”

Nadal’s career results have been, relatively, less consistent at Wimbledon, and he admits his lack of match practice on grass could leave him vulnerable in this year’s early rounds.

“Playing well at Roland Garros helps the confidence level but the grass is a different surface and there is little logic to these things,” the world number four said.

“I haven’t played on grass for three years and it will be difficult. The first rounds will be crucial – if you get through them, the opponents are more difficult, but you also play with more rhythm.

“The first matches you play, against people with recent experience on these courts, are a bit of a lottery.”

He then turned to personal matters, saying: “If all goes well, I’m going to be a father.

“I’m not used to talking about my personal life, I prefer to keep a low profile for tranquility. I don’t anticipate this to mean a change in my professional life,” Nadal said.