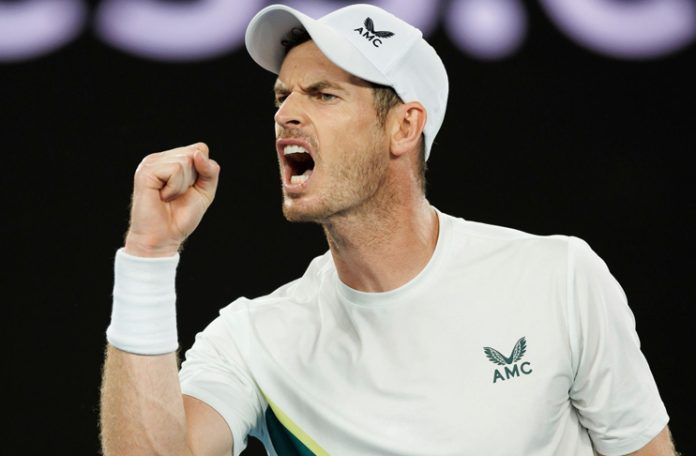 MELBOURNE: Andy Murray rolled back the years to defeat 13th seed Matteo Berrettini in a five-set epic at the Australian Open on Tuesday, on a sweltering day that saw play suspended for three hours on most courts.

There was controversy off the court meanwhile on day two after organisers banned Russian and Belarusian flags at Melbourne Park.

Novak Djokovic is set to make his eagerly anticipated return to the Grand Slam later Tuesday following his ban and deportation last year.

“I will be feeling this this evening and tomorrow,” the former world number one, who plays with a metal hip after career-saving surgery, said.

“But right now unbelievably happy and proud of myself.

“I’ve put a lot of work into the last few months with my team to give me this opportunity to perform in stadiums like this, in matches like this and against players like Matteo — and it paid off tonight.”

“I did well to get through,” added the three-time major winner, who faces either Fabio Fognini or Thanasi Kokkinakis in round two.

Former US Open champion Thiem was outplayed as he continued his return from a wrist injury which kept him off court for nine months across the 2021 and 2022 seasons.

As the mercury rose, the heat forced play to be halted on outside courts. The roofs were closed on the three main stadiums — Rod Laver Arena, Margaret Court Arena and John Cain Arena.

Play resumed on the outside courts about three hours later.

Like in the women’s draw, the men’s seeds were mostly untroubled.

Serbia’s Djokovic was deported on the eve of last year’s Australian Open because of his stance on Covid vaccines.

But the 35-year-old will be back when he faces Roberto Carballes Baena of Spain in his opener and looks likely to be given a warm reception by the Rod Laver Arena crowd.

He is bidding to win the Australian Open for a record-extending 10th time and in doing so tie defending champion Rafael Nadal’s men’s all-time record of 22 Grand Slam crowns.