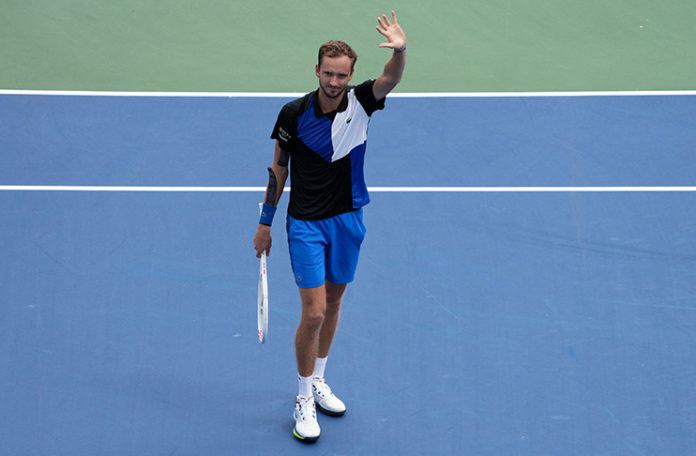 CINCINNATI: Daniil Medvedev and Stefanos Tsitsipas advanced to a semi-final showdown after both dismissed American opponents at the ATP and WTA Cincinnati Masters on Friday.

Tsitsipas, semi-finalist at the last two editions, weathered a brief first-set rain interruption on the way to his 7-6 (7/5), 5-7, 6-3, the defeat of John Isner, playing here for the 15th time at age 37 and the oldest quarter-finalist since 1969.

The tight battle ended just before midnight as Norrie completed what he called one of his best career wins.

He stumbled leading a set and 4-1 as Alcaraz pushed back, winning the second set to level the match.

“I was thinking too much about the finish line,” the winner said. “I got tight and he raised his level.

“I had to take my time or the match could have gotten away from me…I managed to turn it around.”

Greek fourth seed Tsitsipas was relieved to have passed his examination by Isner.

“It’s never easy to play him, due to all his variations of play,” Tsitsipas said. “The most important thing is to stay patient.

“The match came down to a few points. I was able to hang in there and make one more ball – he didn’t give me a lot to work with.”

Tsitsipas added: “Against Medvedev, I need to be concentrated and approach my game in a precise manner. “I will let my tennis do the talking.”

Medvedev, the 2019 tournament winner, strengthened his grip on the world number one ranking at the last major tune-up prior to the US Open, earning his victory over 11th seed Fritz in one hour, 40 minutes.

“The second set was much better than the first,” Medvedev said. “Taylor is a great player, from the baseline he didn’t give you much space. “He was hitting the ball strong, making a lot of good points. “But I’m happy with my level. If I can continue to play this way and raise my level during matches I can beat anybody,” added Medvedev, who leads semi-final opponent Tsitsipas 7-2 in head-to-head meetings.

The Kazakh, who lifted the All England Club trophy last month against the odds, exited the pre-US Open event in 92 minutes as she went down to the American titleholder from 2019.

“Elena is a remarkable player who can turn a match around at any moment,” unseeded Keys said. “I needed to stay out front.

“It felt like I needed 12 match points, so I’m very happy to get the win,” added Keys who on Thursday ousted world number one Iga Swiatek.

Second seed Aryna Sabalenka ended the dream run of Zhang Shuai with a 6-4, 7-6 (7/1), defeat after the Chinese player had put out Naomi Osaka and second seed Anett Kontaveit.

Sabalenka plays for the final against qualifier Caroline Garcia, who defeated American Jessica Pegula, the winner over US Open champion Emma Raducanu in the previous round, 6-1, 7-5 in 74 minutes.

The French winner leads the Tour with 25 main-draw victories since June; she was the first from her nation to play a Cincinnati quarter-final since Marion Bartoli 12 years ago.

“I had the worst warmup of the week today,” Garcia said. “But that doesn’t mean you will play badly. “I was able to play the aggressive style that I like. I hit very freely against a solid opponent.

“I had to play my best today to beat Jessica. I did it and I’m very happy I got the win.”

READ: ‘Shaheen is our best bowler, so we’ll miss him in Asia Cup’ says Shadab