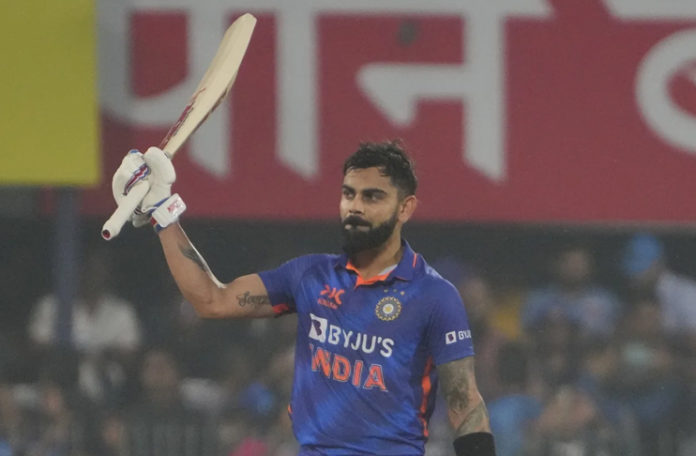 GUWAHATI: India’s star batter Virat Kohli amassed his 45th ODI and 73rd international century to power his side to a dominating 67-run victory over Sri Lanka in the first ODI of the three-match series here on Tuesday.

The right-handed batter survived two dropped catches on 52 and 81 before going on to hit a record-equalling ODI century and played a pivotal role in the team’s triumph.

Batting first after being invited by the Sri Lankan captain, the Indian batting line-up displayed a combined effort to post a massive 373/7 in their allotted 50 overs.

Skipper Rohit Sharma and his opening partner Shubman Gill laid a solid foundation as they put on a 143-run opening partnership with both scoring half-centuries.

Rohit, who missed India’s 2-1 T20I series triumph, scripted a strong start to the ODI series as he scored a quickfire 83 off just 67 deliveries with the help of nine boundaries and three sixes, while Gill fell after scoring a 60-ball 70.

Following the openers’ departure, Kohli Kohli stood firm and despite losing partners at the other end, carried on charging the Sri Lankan bowlers.

The right-handed batter top-scored for India with a record-setting 113 off a mere 87 deliveries that witnessed the ball crossing the fence 13 times including a maximum.

Besides the trio, wicketkeeper-batter KL Rahul remained the notable run-getter with his vital 39-run knock and stitched a 90-run partnership with Kohli for the fourth wicket.

Set to chase a mammoth 378, Sri Lanka could manage to amass 306/8 despite a fighting century from their skipper Shanaka, who remained unbeaten on 108 off just 88 deliveries including 12 boundaries and three sixes.

The touring side had a dismal start to the run chase as they lost two quick wickets including Kusal Mendis bagging a golden duck.

Nissanka (23) made an effort to revive the pursuit with his valiant batting and a 72-run fourth-wicket partnership with Dhananjaya de Silva, who scored 47.

Sri Lanka slumped to 206-8 in the 38th over, but Shanaka kept the game alive with an unbroken 100-run stand with Rajitha; also bringing up his century in style with a four and a six on the last two deliveries.