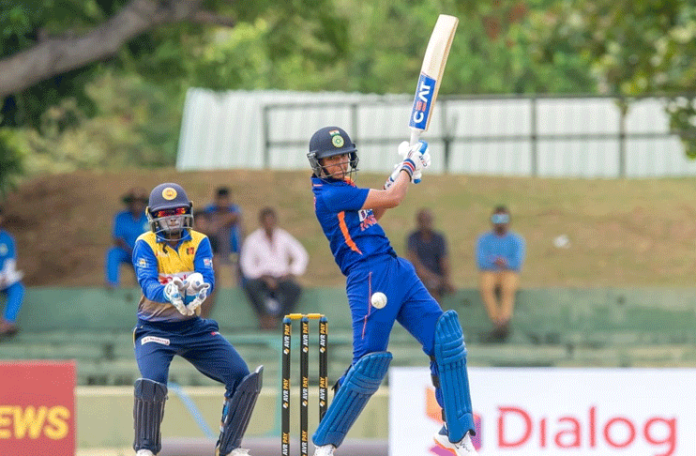 DAMBULLA: Indian captain Harmanpreet Kaur starred with her brilliant all-round performance that assisted her side to defeat Sri Lanka in the second Women’s T20I to take an unassailable 2-0 lead in the ongoing series.

In a low-scoring thriller, Indian batters held their nerves calm as they amassed a 126-run target with five wickets and as many balls to spare to claim the series victory.

In the run chase, the touring side’s openers provided a solid start to the side as the duo of Smriti Mandhana and Shafali Verma added 30 runs for the first wicket before Verma fell short against Oshadi Ranasinghe in the fourth over.

The right-handed batter Sabbhineni Meghana then joined Mandhana at the crease and carried on the proceedings for the touring side. Her stay, however, was cut short as she perished in the sixth over after scoring a quick 17 off 10 deliveries.

Mandhana then joined hands with her skipper Kaur and anchored the run chase with an important 38-run partnership for the third wicket. The opening batter, who was looking solid for her half-century, fell 11 short of it as Inoka Ranaweera bagged her first wicket.

The left-handed batter remained the top-scorer for her side with a magnificent 39 off 34 balls, laced with eight boundaries.

Following her departure, the touring side lost two quick wickets and was soon slipped from 86-2 to 114-5 in the 18th over but Kaur’s gritty knock helped the team march towards the finishing line. The skipper remained unbeaten on 31 off 32 balls and made sure to steer her side to the victory.

For Sri Lanka, Ranaweera and Kashiva Dilhari struck twice, while Sugandika Kumari made one scalp.

Batting first, the home side was off to a flying start as their opening pair of Vishmi Gunaratne and the skipper Chamari Athapaththu put on an astounding 87-run opening stand before the latter lost her way in the 14th over after scoring 43 off 41 balls with the help of seven boundaries and a six.

Garunaratne, who was struggling to score freely, also fell briefly after Athapaththu’s dismissal as he made her way back in the 17th over. She remained the top scorer for her side with a rather slow 45.

Following her departure, the home side began to lose wickets at an alarming with none of their rest batters could score in the double-figure as the Indian bowlers managed to restrict Sri Lanka to 125/7 in the allotted 20 overs.

For India, Deepti Sharma made two scalps, while Renuka Singh, Radha Yadav, Pooja Vastrakar, and Kaur struck out a batter each.