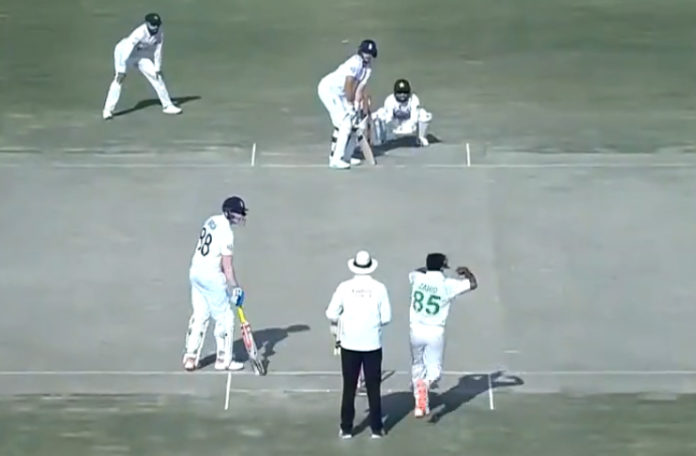 RAWALPINDI: England batter Joe Root stunned the cricket world on Sunday when he batted left-handed during the first Test against Pakistan in Rawalpindi.

England batter Root has been in the news for his innovations during the first Test against Pakistan in Rawalpindi.

During the fourth day, Root faced up left-handed to Zahid Mahmood for the first two deliveries of the Pakistan spinner’s sixth over. The former England skipper swept the first ball directly to the fielder at square leg.

However, the innovation almost got backfired as Root’s sweep shot was put down by pacer Naseem Shah at mid-wicket.

He obviously took the hint as he quickly ditched the idea and played the remainder of his innings as he usually does as a right-hander.

Later, Root was later dismissed for 73 as England continued the aggressive approach they have displayed consistently throughout this first Test.

Imam-ul-Haq and Saud Shakeel resisted with a valiant 55-run partnership to steer Pakistan to 80/2 after England set a 343-run target following a brave decision by captain Ben Stokes to declare the second innings on 264/7, on the penultimate day of the first Test.

The fiery England side turned the dull Rawalpindi Test into an enthralling contest as they put Pakistan to bat again on the same day and took wickets to put the home team under pressure.

Pakistan, however, are perfectly positioned to win the first Test as they require 263 runs on the final day to take the lead in the three-match series.

Ben Stokes-led side undertook an aggressive approach as they batted only 36 overs in their second turn after bowling out Pakistan 579 in the first session on day 4.