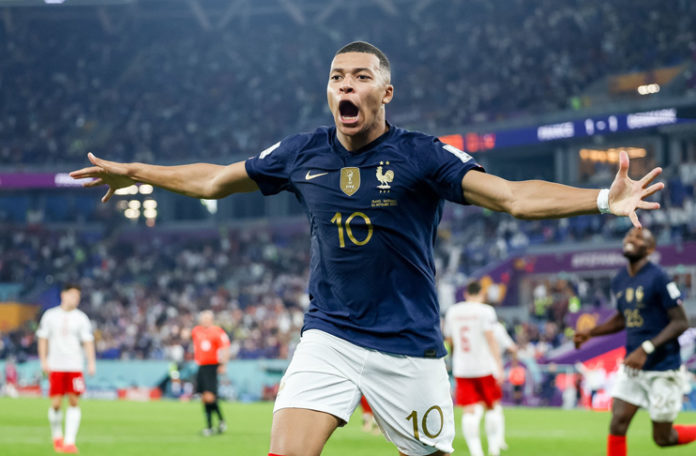 France continued their world cup title defence in style as Mbappe’s men outclassed Robert Lewandowski’s side to storm through to the last eight.

In a knockout match, majorly dominated by France, Poland, however, did well to keep the French strikers quiet for almost the entirety of the first half before Olivier Groud’s scintillating bicycle kick opened the scoring for Les Bleus.

Mbappe slid a through-ball into the path of Giroud in the box as he gained a step on Jakub Kiwior. The forward shot on the turn and had the placement to find the bottom-right corner.

Giroud’s first-half goal was his 52nd for the Les Bleus that allowed him to leapfrog Thierry Henry to become France’s all-time record scorer.

After setting up a history-making goal for Giroud, Mbappe joined the party in the 71st minute when Ousmane Dembele cut inside from the right flank and fed Mbappe in the space, who took a touch before hammering a right-footed strike past Wojciech Szczesny.

Mbappe then put an end to any aspirations of a Poland comeback by scoring again at the death to move to nine goals in 11 World Cup appearances, the second-most for a French player at the tournament.

The French defence, on the other hand, snuffed out the threat of Robert Lewandowski, who, although got a consolation goal on a penalty in the stoppage time but it was too late for him to trigger a late twist as France ran away with a comfortable triumph.

Following their Round of 16 victory, Deschamps’ side will now take on either England or Senegal in the last quarter-final on Sunday.