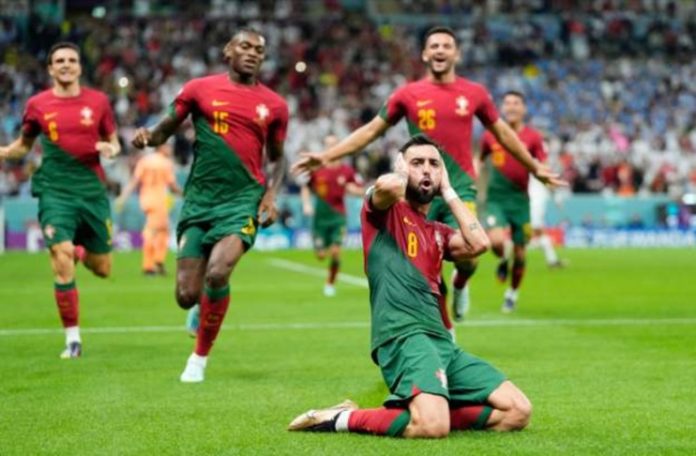 DOHA: Bruno Fernandes struck twice in the second half to beat Uruguay 2-0 as Portugal became the third team after France and Brazil to confirm place in the round of 16 of the FIFA World Cup 2022.

Manchester United midfielder scored the opener within ten minutes after the break when he curled a great cross to his teammate Cristiano Ronaldo, who did not find a touch as the ball ended up in the nets.

Uruguay nearly found an equaliser when substitute Maxi Gomez hit the woodwork just seconds after coming off the bench and before Luis Suarez missed from close range on swinging freekick from De Arrascaeta.

Portugal, however, doubled the lead in the stoppage time when Fernandes scored his second from the spot after a VAR check adjudged Jose Gimenez to have handled the ball.

Fernandes came close to a hat-trick before the final whistle but his low shot from the edge of the box hit the post.

With only one point in two games, Uruguay are placed last in Group H. They now have to produce their best in last group encounter against Ghana and still hope that the result of the other match between Portugal and South Korea fall in their favour in order to avoid the early exit from the tournament.

READ: Brazil edge Switzerland to join holders France in Round of 16