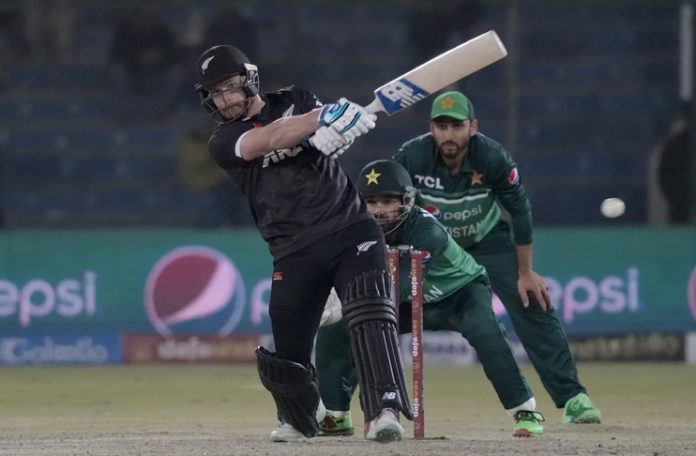 KARACHI: New Zealand batter Glenn Phillips put on a scintillating show with his brisk 63-run knock and powered his side to defeat Pakistan by two wickets in the ODI series decider.

Set to chase 281, New Zealand amassed the total on the first delivery of the 49th over at the back of a quickfire 63-run knock of Phillips.

The touring side had a decent start to their run chase as openers Finn Allen and Devon Conway provided an important 43-run partnership before Allen got run out in the eighth over after scoring a run-a-ball 25.

Following the dismissal, Conway and skipper Kane Williamson anchored the run chase with a gritty partnership and took New Zealand to over the 100-run mark before Agha Salman picked up his maiden ODI wicket and provided a much-needed breakthrough to Pakistan.

Conway scored 52 off 65 deliveries, laced with five boundaries and a six.

Williamson then joined hands with Daryl Mitchell and put on another important partnership for his side as the duo added 52 runs for the third wicket before both Mitchell perished for 31.

New Zealand skipper Williamson then brought up his 42nd half-century but could not stick for long as he got run out for 53 off 68 deliveries with the help of two boundaries.

With New Zealand struggling at 181/5 after Michael Bracewell’s departure in the 36th over, Phillips came out for his side and turned the game on its head with clean striking and put Pakistan bowlers under pressure.

The right-handed batter scored a quickfire half-century off just 28 deliveries and brought New Zealand back into the game despite no support from the other end.

Amid Phillips’ brilliance, New Zealand kept losing wickets but the right-handed batter stood firm and drove his side to glory in the 49th over.

Salman Ali Agha and Mohammad Wasim Jr took two wickets each, while Mohammad Nawaz and Usama Mir made one scalp each.

Batting first after winning the toss, Pakistan posted a decent 280/9 on the board at the back of a brilliant century and a half-century from Fakhar and Rizwan respectively.

The hosts had a dismal start to their innings as they lost two early wickets including their skipper Babar Azam for a mere 21 in the seventh over.

Following the setback, Fakhar and Rizwan scripted an astounding recovery for Pakistan as they added 154 runs amid their third-wicket partnership and brought Pakistan back into the game.

Rizwan was the core aggressor of the stand as he kept ticking the scoreboard with his sensible rotation of strike while Fakhar played an anchoring role.

The duo frustrated the Kiwi bowlers and were looking for their team to amass the 300-run mark before Ish Sodhi provided a much-needed breakthrough to his side in the form of Rizwan.

The leg-spinner castled Rizwan with a googly and brought an end to his vital 79-run knock. He faced 74 deliveries and hit six boundaries.

Following Rizwan’s dismissal, Fakhar continued to push for the runs and soon brought up his century. The left-handed batter, however, soon perished after achieving the landmark and remained the top-scorer for his side in the series decider.

With both set batters back in the pavilion, Pakistan batters struggled to pound on the foundation and the hosts began to lose wickets at regular intervals.

Agha Salman, however, stood firm at one end while wickets were tumbling at the other before perishing in the final over after a vital 43-ball 45.

Veteran pacer Tim Southee led the bowling attack for New Zealand with three wickets, while Lockie Ferguson bagged a couple. Spinners Sodhi and Michael Bracewell struck out a batter each.