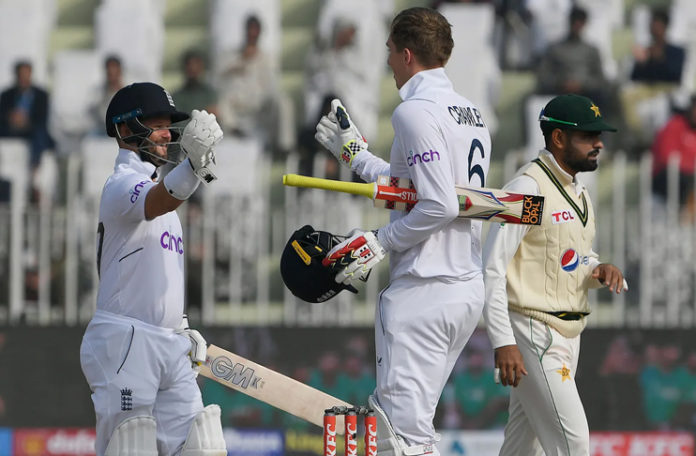 RAWALPINDI: Various records were set as England batters baton-charged Pakistan on the opening day of the Rawalpindi Test as they raised a record 506/4 before stumps, here on Thursday.

English openers Zak Crawley and Ben Duckett, who laid a solid foundation for an incredibly dominant first day over host Pakistan, put on a massive 233 runs partnership as both scored centuries.

The duo took on Pakistan bowlers amid their stand and set various records with their quickfire opening stand.

Crawley, who was going through a rough patch since scoring his career-best 267 against Pakistan in August 2020, regained his form as he scored his third century overall. His 86-ball hundred was the fastest by an English opener in Test cricket.

Meanwhile, the 233-run opening stand between Crawley and Duckett marked the fastest double century by any pair in Test cricket as the duo conceded just 183 balls to register themselves in the record book.

Earlier, the duo of Crawley and Duckett powered England to a flying start as they gathered 174 runs in the first session – the highest score in an opening session of a Test match.

For the first time in England’s Test history, both openers have scored a fifty off as many balls or less (Crawley 38 balls and Duckett 50 balls). England scored 14 runs in the first over of the match – the highest they scored in a Test match.

Following the openers’ magic, it was Harry Brook who lit up the Pindi Cricket Stadium with a quickfire century on just 80 balls, the third fastest for England in Test cricket.

Their centuries powered England to raise a mammoth 506/4 on an opening day despite bad light reducing the day’s play to 75 overs. England, however, managed to pose enough runs to break a 112-year-old record of the most runs on the first day of the match. They also became the first team to cross the 500-run mark on an opening day.