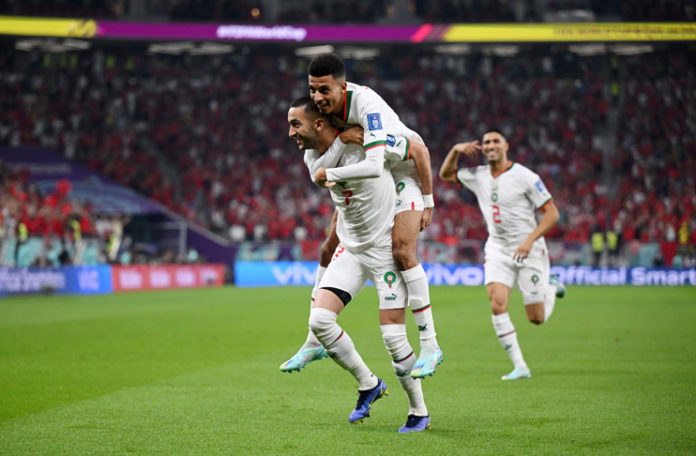 DOHA: Last World Cup’s third Belgium’s goalless draw against then runners-up Croatia sent them crashing out of the ongoing 2022 mega event, while spirited Morocco edged Canada 2-1 to make it to the knockouts.

The ongoing FIFA World Cup 2022 marked a major upset as the second-ranked Belgium, who finished third in the 2018 World Cup failed to make it to the Round of 16, while 22nd-ranked Morocco topped Group F with seven points above last edition’s runners-up Croatia.

Morocco made it to the knockouts for the first time since 1986 as they downed eliminated Canada 2-1 on Thursday.

The North African side took just four minutes to take the lead in an all-important clash as Hakim Ziyech took advantage of a terribly mixed-up Canada defence to net the second-fastest goal of the ongoing world cup.

Youssef En-Nesyri soon doubled Morocco’s lead in the 23rd minute as he received a simple through-ball from Achraf Hakimi and raced past Canada’s centre-back Kamal Miller before firing it past Milan Borjan and into the nets.

Canada got a rare advantage five minutes before half-time when defender Sam Adekugbe rifled in a low cross and Nayef Aguerd stuck a leg out, causing the ball to deflect and raced past Morocco goalkeeper Yassine Bounou to make it 2-1.

John Herdman’s side, however, failed to capitalize on the opportunity and could not fire in an equalizer as the Moroccan defence dropped deeper to bar any further twist and the Atlas Lions escaped the groups as toppers.

Morocco’s 2-1 triumph over Canada meant that last world cup’s third-placed Belgium could only survive in the tournament by defeating Croatia but the goalless draw against Croatia spilt beans on their hopes of making it to the knockouts.

Roberto Matinez’s side came closer to scoring the match-winning goal at the hour mark when Romelu Lukaku hit the woodwork with the goal gaping on the rebound.