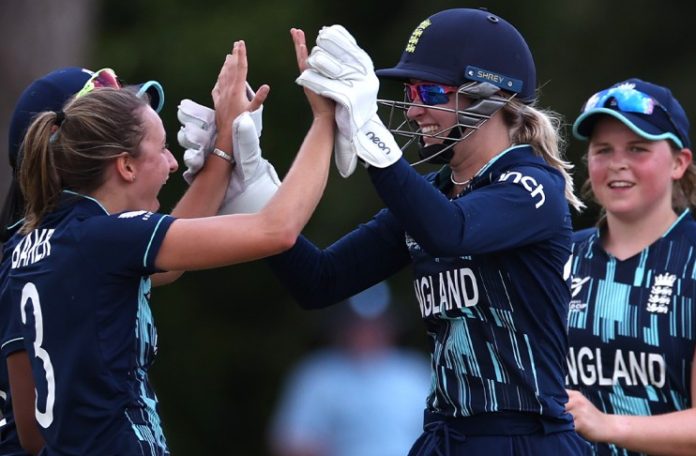 POTCHEFSTROOM: England crushed Rwanda by a staggering margin of 139 runs as they bowled out the weak side for a paltry 45-run total in the U19 Women’s T20 World Cup, here on Thursday.

Electing to bat first, openers Grace Scrivens and Liberty Heap dominated Rwanda bowlers with a magnificent first wicket stand of 124 runs and steered the English side to a mammoth total of 185 runs for the loss of five wickets.

Skipper Scrivens played a fine knock of 51 from 43 balls while Heap blasted 64 off 35, laced with 12 boundaries, to drift England in command.

Rwanda, however, underwent a nightmarish batting collapse during the chase as none of their batters crossed the single-digit except for Henriette Ishimwe, who made 12.

England unfolded the carnage thanks to two wickets each for Alexa Stonehouse, Hannah Baker, Ryana MacDonald-Gay, and Davina Perrin.

With their third consecutive win in Group B, England confirmed their place in the Super six stage of the tournament, where three teams from each group will qualify.

Meanwhile, in a Group C fixture held simultaneously on Thursday, Ireland beat Indonesia by 49 runs thanks to a brilliant all-round performance from Zara Craig, who scored a half-century before pocketing two wickets.