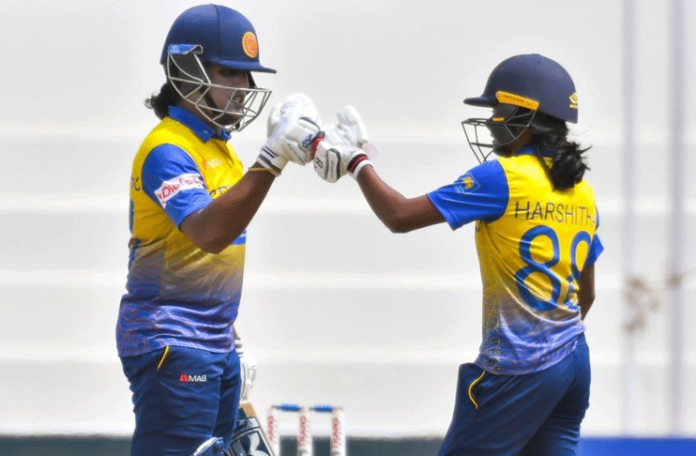 Pakistan’s opening pair put up a cautious start in their attempt to chase the mammoth target of 261 runs mounted by Sri Lanka in the first inning. The top order underwent a complete collapse soon after the first wicket fell in the 8th over as skipper Chamari Athapaththu, who continued her magic with the ball after scoring a ton, dismissed Sidra Ameen in a leg-before wicket at the total of 41.

The next three wickets fell in quick succession as Pakistan were struggling at 48/4 in the 12th over before right-handed batter Omaima Sohail and all-rounder Aliya Riaz braced the team for some time with a 64 runs partnership.

Sri Lankan left-arm spinner Sugandhika Kumari was able to get rid of the pair in the 28th over as she bowled out Omaima, who scored 40 runs off 61 balls including 4 scintillating boundaries.

The momentum shifted back to the touring side as the green shirts were all out on 167 in the 42nd over, losing the wickets at regular intervals. Aliya remained the top scorer for the team as she minted out 56 runs in 82 balls including four boundaries.

Earlier, Sri Lanka decided to bat first after winning the toss. The team had a shaky start as they lost two early wickets on a total of just four runs. However, the skipper and Madavi built a 152-runs outstanding partnership on the 3rd wicket to cement their team’s position in the match.

The Sri Lankan skipper scored a brilliant century before she fell prey to left-arm spinner Anum Amin in the 31st over in a leg-before wicket. Chamari made 101 runs off 85 balls which included 13 fours and a six.

Madavi, however, stood firmly on the crease as she built another vital partnership with Kavisha Dilhari of 60 runs before Anum sent her to the pavilion in the 44th over. Madavi scored 75 runs off 128 balls and hit three boundaries during her knock.

Dilhari soon followed the suit and fell prey to right-arm spinner Omaima Sohail in the 45th over at the total of 220, after scoring 28 runs off 44 balls, including two boundaries.

Right-handed batter Nilakshi De Silva played a superb cameo of 24 runs off 18 balls as she hit two boundaries and remained not out, helping her team to finish 260/7 in the 50 overs.

It is pertinent to mention here that Pakistan have beaten the touring side Sri Lanka in the first two ODIs of the three-match ODI series. .