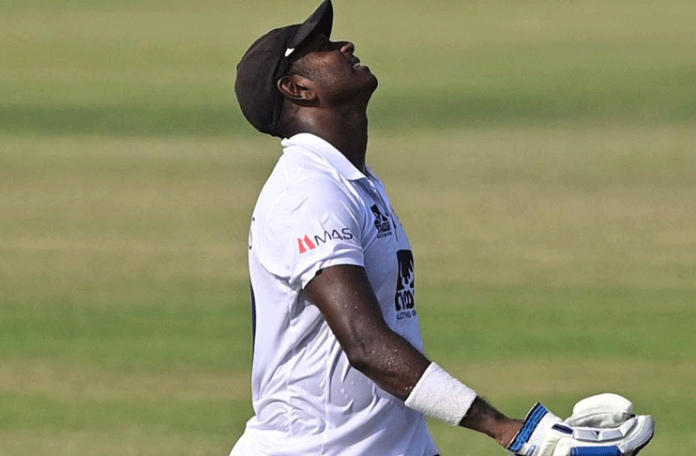 CHITTAGONG: Sri Lankan all-rounder Angelo Mathews got dismissed on 199 against Bangladesh and registered an unwanted record to his name, here on Monday.

On day two of the ongoing first Test against Bangladesh, Mathews, who was looking in fine touch, seemed comfortable registering his double century in Test cricket.

The 34-years-old all-rounder, who has a Test best of 200* against Zimbabwe, however, failed to register his second double ton as he fell to the right-arm spinner, Nayeem Hasan.

Following his unlucky dismissal, Mathews became just the 12th batter in history to fall one short of a double century. He is also just the third Sri Lankan batter to miss the milestone by a mere one run.

When it's just not your day 😕 pic.twitter.com/vAsT7rjodn

Furthermore, the former captain has become the only batter in Test cricket history, to be dismissed on both 99 and 199.

Angelo Mathews is the only Test batter to be dismissed on both 99 AND 199 💔 #BANvSL pic.twitter.com/ygVsPhcmby

New Zealand’s Martin Crowe, on the other hand, is the only batter to be dismissed on 299 in Test cricket.