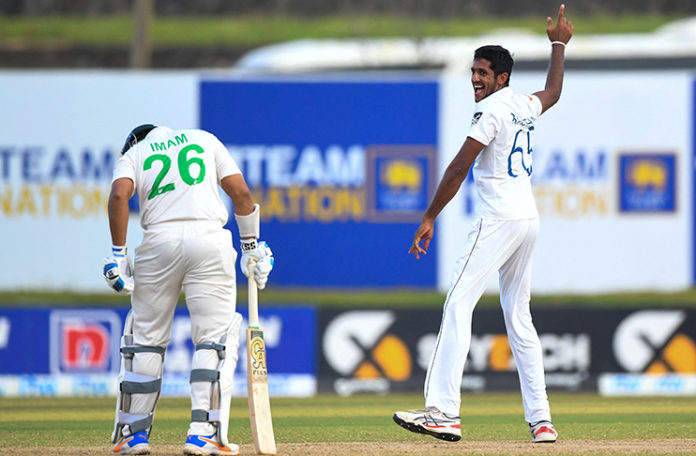 GALLE: Sri Lanka finished the opening day of the first Test in a relatively comfortable position as their bowlers restrict Pakistan on 24/2 after the batters could only muster 222 in the first inning.

Pakistan, in response to Sri Lanka’s 222, finished the opening day at 24/2 after Prabath Jayasuriya and Kasun Rajitha removed both openers – Abdullah Shafique and Imam-ul-Haq – in quick successions for a skimpy 13 and two respectively.

Following the early hiccup, Pakistan captain Babar Azam (1*) and veteran right-handed batter Azhar Ali (3*) will now resume the proceedings for the touring side with a deficit of 198 runs.

Batting first, Sri Lanka could only manage to pose 222 runs on the board despite a valiant half-century from their in-form batter Chandimal as the rest of the batters remained unable to contribute significantly to the total.

The right-handed batter top-scored for the side with 76 off 115 balls in the course of his fighting knock, laced with 10 boundaries and a six.

Besides Chandimal, Sri Lanka’s right-arm pacer Maheesh Theekshana remained the significant contributor as he scored important 38 runs down the order and bolstered the home side to a commendable total.

For Pakistan, Shaheen led the way with four wickets, while Yasir Shah and Hasan Ali bagged two each. Mohammad Nawaz, and Naseem Shah, on the other hand, struck out a batter each.

Sri Lanka, after resuming their first innings at 166/8 in the final session of the opening day, added 56 runs for the remaining two wickets as Theekshana displayed brilliance after Chandimal’s dismissal and added quick runs at the death.

The touring side earlier enjoyed a delightful second session as the hosts could only add 86 runs at the cost of four wickets at the back of a gritty unbeaten knock of Chandimal.

Resuming their score at 80/4 after Lunch, Sri Lanka soon lost half of their side on a combined score of 99 as Shaheen claimed his second wicket by removing Dhananjaya de Silva for 14.

Chandimal and Ramesh Mendis then attempted to anchor the proceedings for Sri Lanka as they added an important 27 runs for the seventh wicket before right-arm speedster Naseem struck his first by removing the latter on 11.

All-rounder Nawaz then further pushed the hosts on the back foot as he removed the tailender Prabath Jayasuriya for four and Sri Lanka, eventually, slipped to 133/8.

Amid the frustrating collapse, right-handed batter Chandimal displayed astounding resilience and kept the scoreboard ticking single-handedly while scoring boundaries at will. He smashed Naseem for three consecutive boundaries in the 45th over to bring up his 22nd Test half-century.

Sri Lanka, after opting to bat first, were off to a poor start as left-arm pacer Shaheen struck in his second over to remove the Sri Lankan captain Dimuth Karunaratne for a mere one.

Following the early hiccup, the hosts marched towards recovery with a gritty 49-run partnership for the second wicket as opener Oshada Fernando and Kusal Mendis batted sensibly and anchored the innings.

The duo appeared settled and was ticking the scoreboard comfortably, till the 15th over before the returning leg-spinner Yasir removed Mendis for 21. He faced 35 deliveries and smashed three boundaries. Following his departure, the hosts slipped to 60/2.

Pakistan pacer Hasan then added to the misery of the home side as he struck out Fernando in the next over, who remained the top-scorer for Sri Lanka thus far with 35 runs off 49 deliveries.

With the side struggling at 60/3, the veteran Sri Lankan batter Angelo Mathews looked to settle things down and took on a defensive approach, only for bagging a 15-ball-duck to Yasir.

Following Mathews’s dismissal, the home side were in all sorts of trouble at 68/4 in the 21st over. Sri Lanka’s hero for the second Test against Australia, Dinesh Chandimal and Dhananjaya de Silva then carried their way till lunch as they added 12 runs for the fifth wicket to help Sri Lanka finish at 80/4.