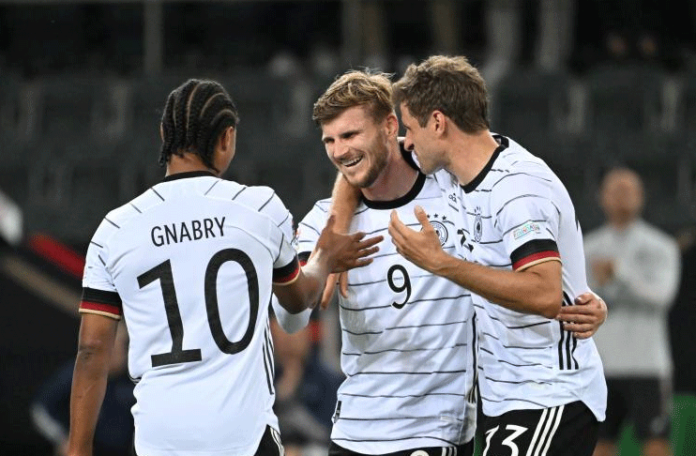 MONCHENGLADBACH: Germany thrashed Italy 5-2 in a home game to secure their first win in the UEFA Nations League after four winless games, here on Tuesday.

Germany showcased a phenomenal display of attack as Timo Werner struck twice after Joshua Kimmich, Ilkay Gundogan and Thomas Muller put their side in the driving seat.

Germany surpassed Italy for the second position in the Group A3 standings. Germany after three earlier draws and a win yesterday secured six points – one point behind Hungary.

Germany scored the opening goal of the game in the 10th minute when Kimmich charged into the box and tapped in a David Raum cutback.

The hosts dominated the opponent with an array of passing moves throughout the game.

Gudogan doubled the lead for the home side with a penalty goal on the stroke of halftime after Bastoni brought down Hoffman inside the area and the referee awarded a penalty.

Muller netted the ball again four minutes into the second half to tighten the grip of his side on the game.

Germany continued with their attack as Werner struck two back-to-back goals to seal the game for his side.

Italy finally retaliated in the 78th minute as Wilfried Gnonto hit the box to become the youngest scorer for Italy.

Alessandro Baston scored another goal in the stoppage time to close the gap for his side, who now slipped to the third spot of Group A3 standings