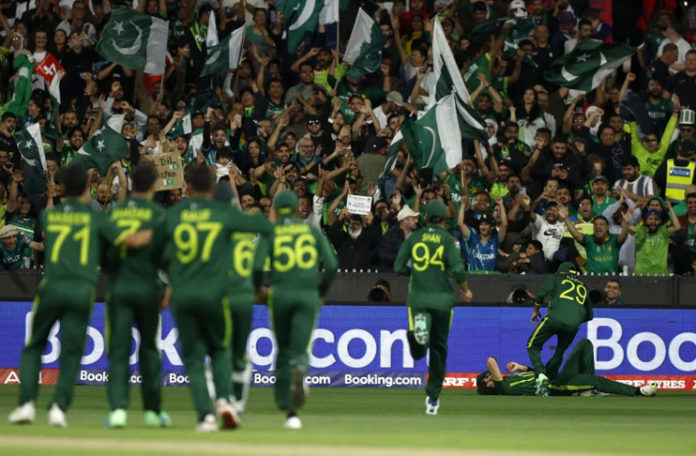 “Congratulations England, good all-round performance to lift the cup. Well played Pakistan, you bowled good and tried your best despite a low score,” the President wrote.

Congratulations England, good all-round performance to lift the cup. Well played Pakistan, you bowled good and tried your best despite a low score.

Meanwhile, PM Shehbaz credited the team for ‘hard and brave’ fightback and hailed the bowling performance. “We are proud of our boys in green for making it to the final match of this mega tournament,” he tweeted.

Team Pakistan 🇵🇰 fought back hard & brave. Great bowling performance. But England 🏴󠁧󠁢󠁥󠁮󠁧󠁿 played better today. We are proud of our boys in green for making it to the final match of this mega tournament. 👏

All-rounder Ben Stokes held his nerves strong to cruise England to their second T20 World Cup victory as they defeat Pakistan by five wickets in the final, here at Melbourne Cricket Ground (MCG) on Sunday.

Set to chase 138, England completed the tricky run chase in 19 overs despite a strong attack put up by the Pakistan bowling department, thanks to their all-rounder Stokes, who powered his side to victory at the back of his brilliant half-century.

England were off to a poor start to their run chase as they lost their in-form opener, Alex Hales, in the first over, courtesy of a magnificent in-swinger by Shaheen Shah Afridi.

Jos Buttler and Harry Brook then attempted to anchor the run chase with a scratchy 25-run partnership for the second wicket but Haris Rauf struck in his first over to break the budding partnership as he removed the latter for just 10.

Haris then struck in his next over to put an end to Buttler’s struggling knock, who could manage to score 26 off 20 deliveries.

With England 45/3 in the sixth over, Stokes then stitched two vital partnerships with Harry Brook (20) and Moeen Ali (19) and added 39 and 48 runs for the fourth and fifth wicket respectively.

With 12 required in 18 deliveries, Stokes held his nerves calm and steered his side to second T20 World Cup glory with six balls to spare. The left-handed batter top-scored for England with an unbeaten 52 off 49 deliveries, laced with five boundaries and a six.

Haris led the bowling attack for Pakistan with two wickets, while Shaheen, Shadab and Wasim Jr made one scalp each. Sam Curran starred with impressive bowling figures of 3/12 as England bowlers ran through the batting line to restrict Pakistan to 137/8.