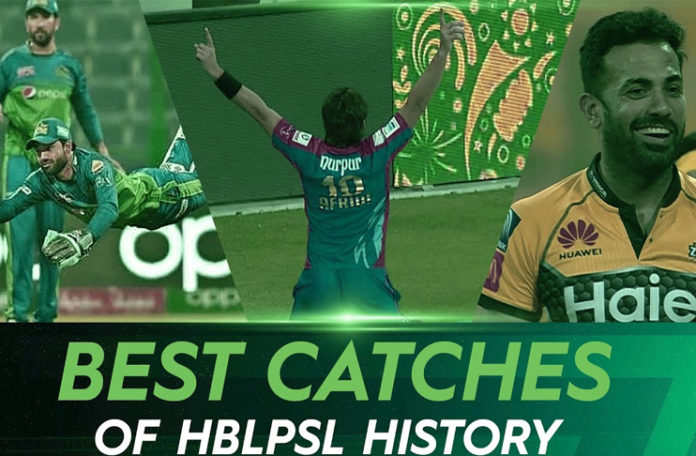 LAHORE: The Pakistan Super League (PSL) posted a compilation video of the best catches on its social media platforms ahead of the upcoming seventh edition, featuring the likes of Mohammad Rizwan, Sarfaraz Ahmed and Shahid Afridi.

In the video, PSL compiled the best catches taken by different players in the previous seasons of the marquee event.

Taking to YouTube, the PSL shared the compilation video, to boost the excitement of the fans.

In the eighth match of the PSL 3 between Karachi Kings and Lahore Qalandars, the then Kings’ player Joe Denly took a stunner at the point diving full to his right to grab a one-handed catch of Mohammad Irfan Junior’s delivery; dismissing Dinesh Ramdin.

Sarfaraz Ahmed judged it to perfection against Peshawar Zalmi (PSL 5)

On Tymal Mills’ deceiving delivery, Tom Banton launched the ball into the sky. The wicket-keeper and the skipper of Quetta Gladiators – Sarfaraz Ahmed ran backwards and took a sharp catch as the 34-years-old overran but managed to grab the ball in his gloves in the end.

During the Kings’ faceoff against the Gladiators, Shahid Afridi stole the show with a stunning catch on the long-off boundary. Gladiators’ batter Umar Amin flicked the ball on Irfan Junior’s delivery but, could not time it well to sail over the fence. Standing at the long-off boundary, Afridi plucked the ball out of the boundary threw it in the air to run back into the field and grabbed it safely inside the boundary.

Extra bounce on Blessing Muzarabani’s delivery forced Zalmi’s firepower David Miller to top-edge the ball; launching it in the sky. Rizwan ran quickly backwards and judged the swirling ball to perfection, dived perfectly to take the catch of the season.

In a clash against the Qalandars, Wahab Riaz managed to pull off a sharp catch diving to his left as Faizan Lakhani crunched the ball for the extra cover, Riaz, standing at the mid-off position showed athletism to hold on for an astonishing catch despite a slow start.

It is apropos to mention here that the seventh edition of the PSL will kick off on January 27 as the defending champions Sultans will lock horns with the former champions Kings in the league’s opener.