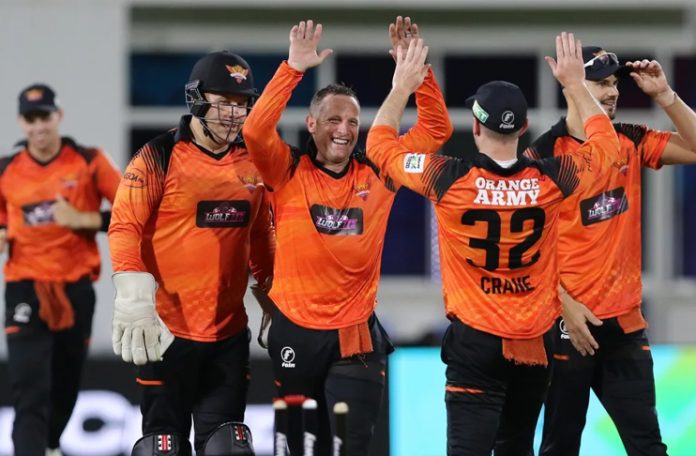 Sunrisers outclassed the Super Giants in every sphere to claim their first bonus of the season as they bundled out the opposition for a paltry 86 after posting a mammoth 210/2 on the board.

Adam Rossington and Jordan Hermann led the batting assault for SEC as they stitched an outstanding 101-run opening partnership before skipper Aiden Markram and Tristan Stubbs built on the leverage.

Rossington made a phenomenal 72 from 30 balls, smashing 10 fours and four sixes before he was run out in the 9th over. Hermann and Markram then gathered another 68 runs for the second wicket before Dwaine Pretorius dismissed the former on 59 in the 17th over.

Stubbs and Markram, however, scored 27 off 13 and 44 off 34, respectively to put Sunrises in command before their bowlers did an extraordinary job.

Super Giants, in reply, went through a deplorable batting collapse with seven of their batters failing to make it into double figures.

Dutch spinner van der Merwe became the star of the night as he stormed through the DSG batting lineup in the middle overs.

The left-armer struck back-to-back wickets, dismissing Henrich Klassen and skipper Quinton de Kock on consecutive deliveries in the 7th over before hunting another two, Jason Holder and opener Kyle Mayers in the 9th over.

He completed his five-wicket haul in his next over when he removed Pretorius cheaply while his sixth came only 14 balls later when he bowled out number 10 Prenelan Subrayen.

Apart from der Merwe’s exceptional bowling figures of 6 for 20, JJ Smuts, Markram, Marco Jansen and Mason Crane also took a scalp each to knock out the opposition in just 14.4 overs.