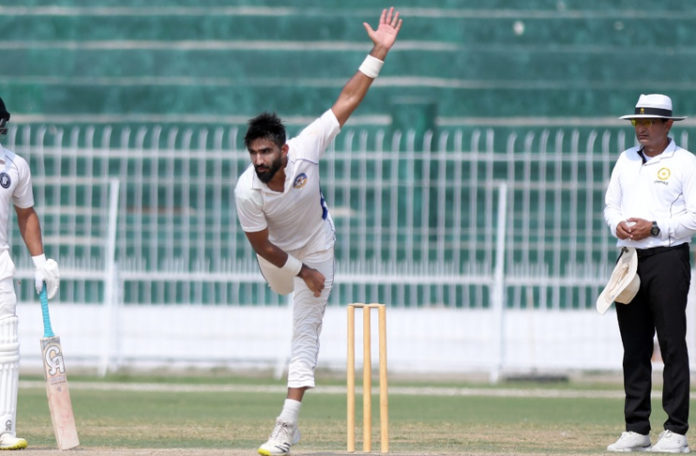 FAISALABAD: Central Punjab’s right-arm spinner Usama Mir stormed through Khyber Pakhtunkhwa’s (KP) batting line as he bagged six wickets to help his team bundle out the opponents for 220 on the opening day of the third round of Quaid-e-Azam Trophy fixture at the Iqbal Stadium on Sunday.

Usama recorded his career-best figures of 6/91 to force a batting collapse after KP were cruising smoothly at 93/0.

Openers Waqar Ahmed (58) and Sahibzada Farhan (44) had provided a flourishing start to their side, but a sudden breakdown of the top and middle-order against Usama caused severe damage to KP as they lost their 10 wickets for 127 runs.

At the end of the day’s play, Central Punjab were 24 without a loss. Abid Ali (20) and Ali Shan (4) will resume their innings on the second day.

However, at Attoabad Cricket Stadium, Northern batters Mohammad Huraira and Faizan Riaz smashed glittering centuries against Balochistan, aiding their side to raise 347/3.

The 20-year-old Huraira registered his fourth career century in his 14th first-class match when he was dismissed after playing a sensational 169-run knock, laced with 23 fours and a six.

Meanwhile, Faizan remained firm on the crease till the end of the day’s play after reaching his 15th FC century. The two batters built a valiant partnership of 172 runs for the third wicket.

Huraira had earlier provided a solid foundation to Northern’s first inning as he added 109 runs for the first wicket with Abdul Faseeh (34) and 34 runs for the second wicket with Umar Amin (22).

Meanwhile, in another fixture of the QEAT third round, Southern Punjab (SP) finished the day on high at 259/7 against Sindh after they were down to 178/6 at one point as Ali Usman (35) and No. 9 batter Mohammad Ilyas (28) remained firm on the crease at Pindi Cricket Stadium.

SP batter Usman Salahuddin top-scored with 89 off 214, laced with 12 boundaries. He contributed to two crucial partnerships as he added 56 runs for the second wicket with Umar Siddiq (47), and 47 runs for the seventh wicket with Ali Usman.