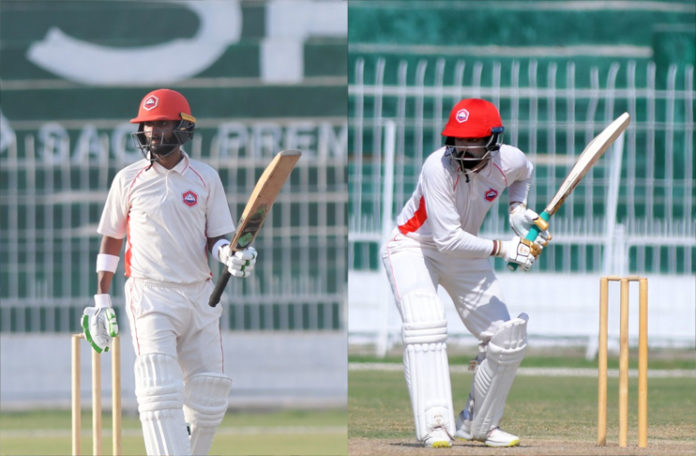 FAISALABAD: Northern batters Umar Amin and Faizan Riaz scored a century each to power their side to cut Sindh’s lead to 94 at the conclusion of the third day of the ongoing second round of the Quaid-e-Azam Trophy 2022-23.

Resuming at an overnight score of 129/2 in response to Sindh’s 457/8, Umar and Faizan scripted an astounding fightback for their side as the pair added 85 runs for the third wicket.

Umar converted his overnight score of 60 into a magnificent century before walking back to the pavilion for 105 off 209 with the help of 14 boundaries and a six.

Faizan, on the other hand, held his ground firm and followed the footsteps of his skipper as he too, smashed a brilliant century.

Mubasir Khan and Rohail Nazir bagged a duck each, while Sarmad Bhatti played a crucial knock of 46. Faizan remained unbeaten for his 106 off 252 including eight boundaries and a six.

Faizan will now resume his magnificent knock alongside Nauman Ali (38) as the side still trail by 94 runs.

Meanwhile, at Abbottabad Cricket Stadium, the second-round fixture between defending champions Khyber Pakhtunkhwa (KP) and Southern Punjab (SP) remained in the balance as the hosts accumulated a 207-run lead as their batting line-up struggled to 275/7 at the stumps on Day 3.

Sahibzada Farhan fell short of his century by 17 runs as he scored 83 off 147, while opening batter Waqar Ahmed was impressive with his brilliant 75 early on.

The left-handed opener scored an unbeaten 72 as Balochistan ended the day at 137/1 after CP declared their first innings at 545/6 after securing a massive 350-run lead.

Imam hit eight boundaries amid his 157-ball knock and provided his side with a vital 132-run first wicket start with Imran Butt (53).

Tayyab fell after scoring 137 off 244 balls, laced with 12 boundaries and a six, while Qasim missed his maiden first-class century by a mere eight runs as he fell to Amad Butt at the score of 92. The right-hander’s 136-ball innings included 13 fours and a six.

Aamer Yamin was the other CP batter amongst runs as he scored a quickfire 50* off just 30 balls with the help of seven boundaries and a six.