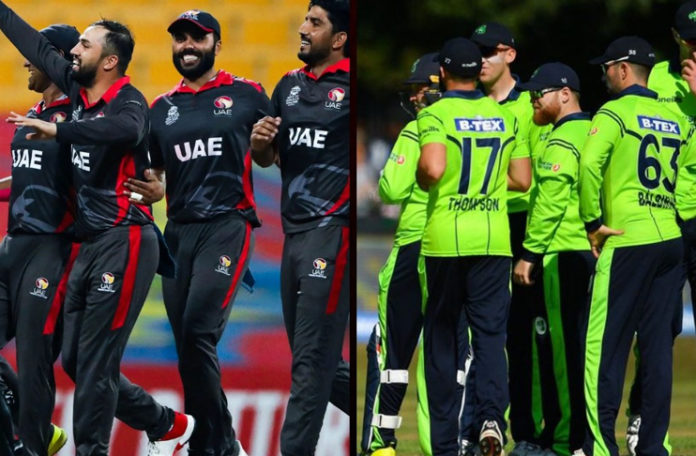 In the first semi-final of the qualifiers, UAE sealed a comprehensive 68-runs victory over Nepal, thanks to their spinner Ahmed Raza, who shone with a sensational five-wicket haul.

After opting to bat first, UAE posted a commendable 175/7 in the allotted 20 overs as their in-form batter Vriitya Aravind and Muhammad Waseem contributed significantly to the team’s total.

Aravind scored 46, while Waseem went on to score an astonishing half-century and top-scored for his side with 70. He faced a mere 48 balls and smacked four boundaries and as many sixes.

For Nepal, Jitendra Mukhiya and Abinash Bohara bagged three wickets each, while Sandeep Lamichhane made one scalp.

Set to chase 175, Nepal’s batting line-up failed completely as the side bowled out for a paltry 107 in response; handing an easy 68 runs victory to the opposition.

The right-handed middle-order batter Dipendra Singh Airee fought hard for his team; scoring a gritty run-a-ball 38, but having no support from the other end, he too, could not steer his side over the line.

For UAE, Ahmed starred; taking a five-fer, while Junaid Siddique claimed three. Zahoor Khan and Rohan Mustafa, on the other hand, struck out a batter each.

In the second semi-final of the qualifiers, Ireland defeated home-side Oman in a comprehensive fashion; emerging victorious by 56 runs.

After being put in to bat first by the home-side, Ireland managed to score 165/7 in the first innings, thanks to the brilliant knock of 47 runs by Gareth Delany.

The side, despite having a poor start; losing two wickets for a mere 19, managed to keep things under control as Delany and Harry Tector put on a magnificent 82-runs partnership for the third wicket and anchored the innings.

Tector scored 35 off 27 balls, while Delany top-scored for the side with a brilliant 47 off just 32 balls with the help of three boundaries and as many sixes. Following their departure, the Irish lower-order batter Andy McBrine bolster the proceeding with a late-onslaught.

McBrine scored a quickfire 36 off just 21 balls; smashing three boundaries and two sixes. His heroics helped the side finish at 165/7 in the allotted 20 overs.

For Oman, Bilal Khan led the way with his three wickets, while Kaleemullah claimed two. Fayyaz Butt and Khawar Ali, on the other hand, made one scalp each.

Set to chase 166, the home side’s batting line-up failed completely and were bowled for 109; handing a comprehensive victory to the opposition.

After an unwanted start in the run chase; losing two wickets for just 28, Shoaib Khan and Zeeshan Maqsood provided a glimmer of hope by putting on a 40-runs partnership.

Shoaib, who scored a quickfire 28, departed early and his dismissal sparked the collapse as the side soon slipped to 84-5. Soon after, Maqsood also made his way back after scoring a gritty 30 and remained the top scorer for his side.

Later, the side kept losing wickets at an alarming rate and in the end was bowled out for 109 in the 19th over.

For Ireland, Simi Singh took three wickets, while Craig Young, Josh Little, and McBrine bagged two wickets each. Mark Adair, on the other hand, made one scalp.

READ: Shaun Tait’s arrival in Pakistan delayed due to his father’s demise