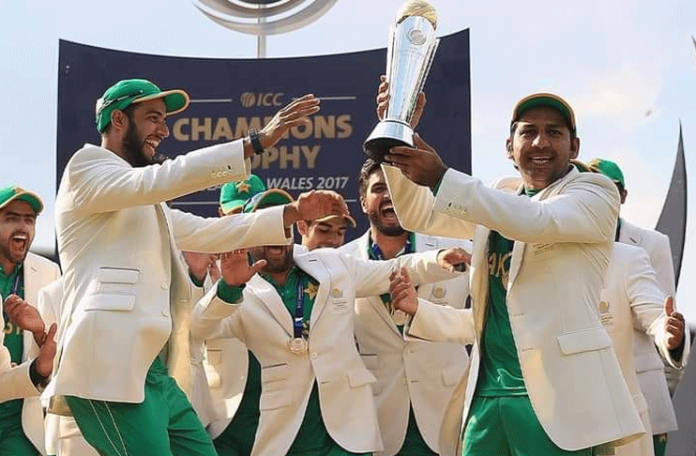 LAHORE: Former Pakistan captain Sarfaraz Ahmed recalled the iconic Champions Trophy 2017 title victory and revealed that he told them they would return in white jackets.

Following the fifth anniversary of Pakistan’s Champions Trophy triumph, the Pakistan Cricket Board (PCB) released a video of the former captain Sarfaraz, who recalled the journey of the historic triumph.

The former captain recalled the commencement of their Champions Trophy 2017 journey against the arch-rival India and revealed that the team had a very productive meeting following the crushing defeat.

“Our journey started with the match against India. We had a very detailed discussion after the defeat where each and every player and the coaches were present,” Sarfaraz stated.

“In that discussion, we spoke about how to win, the best lineup, our players’ attitudes, and whether we could continue to play cricket as we did in this match. We, then, pledged to overcome each other’s shortcomings and the last thing I told to my players that we will return home wearing these white coats,” he maintained.

The former captain went on to reminisce about the historic final against India and claimed that he had a completely different feeling as a captain before walking into the ground than that of the opening encounter against the same opposition.

“As a captain, I think, I was feeling completely opposite in the final as I had in the opening encounter. I was very confident and that’s because our team were in a good momentum and we all know whenever Pakistan team is in momentum, they play brilliantly,” Sarfaraz shared.

The former captain then lauded the Green Shirts’ hero with the bat Fakhar Zaman, whose century powered the side to a commendable total, while also claiming that his opening partner Azhar Ali provided a better momentum earlier in the innings.

“Fakhar played an outstanding inning after losing his wicket on a no-ball. I think Azhar Ali provided a better momentum than Fakhar early on and the latter and the rest of the team then carried the same momentum,” Sarfaraz said.

“Whoever then went out to bat, played brilliantly like Babar, Hafeez Bhai, and Shoaib Bhai. We elevated him [Shoaib Malik] in the batting order and he played a good knock for the team as well,” he maintained.

Sarfaraz also recalled the match-winning spell of Mohammad Amir in the final, who dismantled the strong Indian top-order comprised of the then top-ranked batter Virat Kohli, Rohit Sharma, and Shikar Dhawan. The former captain also praised the former head coach Mickey Arthur for his efforts and involvement with the team.

“Then when we came out to bowl, Amir bowled a really magnificent spell and I think such spells are very unique to watch and it was a match-winning spell,” he said.

“It was the effort of our entire team, the way they adapt and performed on the ground, and our coach Mickey Arthur also worked hard for this glory and remained involved with the team in all the odds,” he concluded.