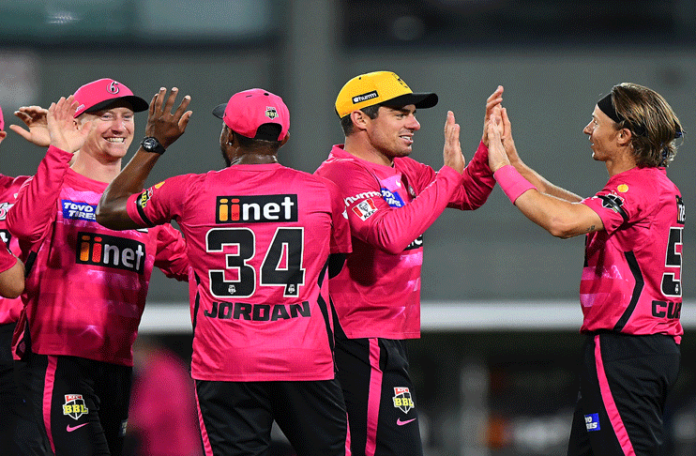 Sixers’ Henriques played a captain’s knock to help his side amass a decent 144-run total in their allotted 20 overs. Henrique scored magnificent 73 off 48 balls laced with six boundaries and two maximums.

The Sixers were off to a poor start, losing five wickets for just 39 runs. Tom Curran, however, stood up for his team and put on an important partnership with his skipper. The pair added 62-runs partnership, taking the team in commanding position. Curran scored sensible 27 off 21 balls including four boundaries.

Following his departure the side lost their remaining four wickets in quick succession and the Sixers, eventually, restricted to 144/9 in 20 overs.

In reply, Hurricanes were off to a decent start as their openers provided a solid opening stand of 38-runs. Soon after, both the openers were sent back to the pavilion at a combine score of 41.

Peter Handscomb and Caleb Jewell, however, showed resistance. Both the batters played gritty knocks but could not go deep to get their side over the line. Jewell scored 20 off 11 balls including one boundary and as many sixes, while Handscomb, top-scored with 47 off 31 balls laced with three boundaries and two maximums.

Following their departure, no other batter could really make an impact, and the side were restricted to 130/8 in 20 overs, lost the match by 14 runs.

Curran was the stand-out bowler for the Sixers, taking three wickets, while Hayden Kerr took two wickets. Benjamin Manenti, Chris Jordan and Steve O’Keefe each struck out a batter.

Henriques, for his heroics, was adjudged as the player of the match.