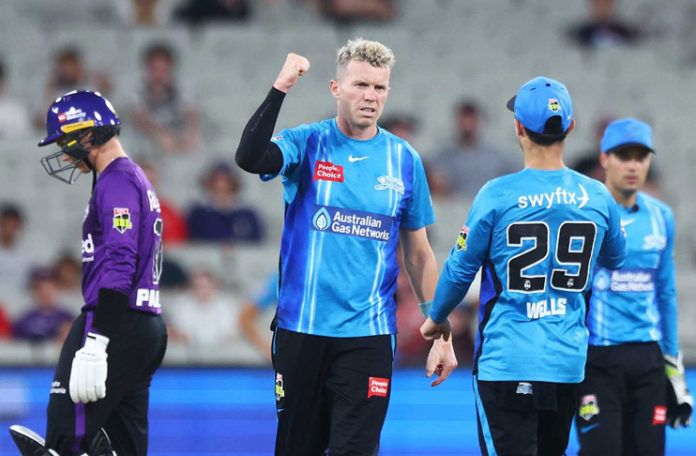 MELBOURNE: Adelaide Strikers defeated Hobart Hurricanes by 22 runs in the first eliminator of the ongoing edition of the Big Bash League (BBL); knocking the latter out of the tournament, here on Friday.

Strikers’ bowlers, led by Peter Siddle, displayed combined effort to bowl out the Hurricanes on 166; providing a comfortable victory to the side.

Set to chase 189, the Hurricanes batting line-up struggled throughout the innings and kept losing the wickets at a consistent rate; resulting in the side falling short off 22 runs, in the end. D’Arcy Short tried to turn things around with his gritty 56 off 34 balls, but, could not drive his side to the victory.

Apart from Short, only Caleb Jewell (35) made a valuable contribution as the rest of the batters scored cheaply.

Following this flop batting show, the Strikers’ bowlers bundled out the Hurricanes on 166. Siddle bagged four wickets, while Harr Conway and Henry Thornton claimed two wickets each. Fawad Ahmed and Matthew Short, on the other hand, made one scalp each.

Batting first, the Strikers had a brilliant start to their innings as the openers – Alex Carey and Short provided a solid 145-runs foundation. The duo batted brilliantly up the order, both scoring half-centuries; putting the Strikers into the commanding position.

Hurricanes’ bowler – Scott Boland, however, managed to break the partnership, dismissing Carey for 67 in the 15th over. The batter faced 45 deliveries and smashed eight boundaries before walking back to the pavilion.

Soon after, Short also departed in the next over as Wil Parker forced the batter to nick the ball straight into the gloves of Ben McDermott. Short top-scored with his berserk 89, facing only deliveries, laced with four boundaries and six sixes.

Following their departure, the Strikers’ middle-order collapsed and could only add 24 runs in the last four overs, losing four wickets.