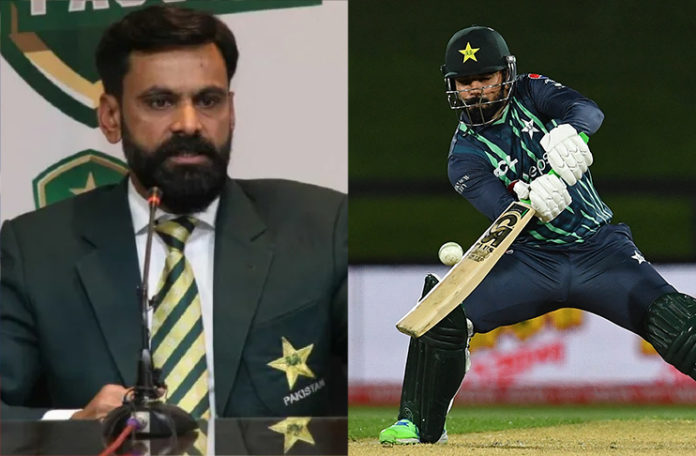 KARACHI: Former Pakistan all-rounder Mohammad Hafeez remained unpleased with the shuffling in the national team’s middle order during the second fixture of the ongoing T20 Tri-series in New Zealand and claimed that the move can give short-term success only.

In the recently-concluded second match of the ongoing Tri-nation T20 series in New Zealand, Pakistan comfortably outclassed the hosts by six wickets to secure the top berth in the standings.

Pakistan’s T20I vice-captain Shadab Khan, who was promoted to bat at No.4, played a crucial knock of 34 runs in the run chase and bolstered the green shirts to chase the 148-run target with 10 balls to spare.

Former Pakistan captain Hafeez, however, seemed unpleased by the tactics and claimed that it can only benefit the national team for short-term success.

“Promotion of [Shadab Khan] at no 4 & M[ohammad Nawaz] at no 5 can give short-term success but [will] put more pressure & doubts in the minds of middle order batters,” Hafeez tweeted.

“Why they [are] there for??? If no confidence in them then why they are with the team?? Middle order [will] remain an issue,” Hafeez questioned.

Promotion of @76Shadabkhan at no 4 & @mnawaz94 at no 5 can give short term success but wil put more pressure & doubts in the minds of middle order batters. Why they r there for??? If no confidence on them then why they r with the team?? Middle order wil remain an issue… #PAKvNZ

Cricket fans, on the other hand, had an otherwise opinion as they claimed that Shadab batting at No.4 can fix Pakistan’s struggling middle-order woes.

Another cricket fan supported Shadab’s promotion in the batting order and also stated that Haider Ali and Asif Ali can be used as finishers.

“I think this batting order is suitable with Shadab coming at the top and we can use Haider’s power-hitting skills and Asif ali as finishers,” he tweeted.

It is pertinent to mention that Pakistan will come face to face with New Zealand again in their next T20 Tri-series fixture, a win over the hosts can take them to the final.