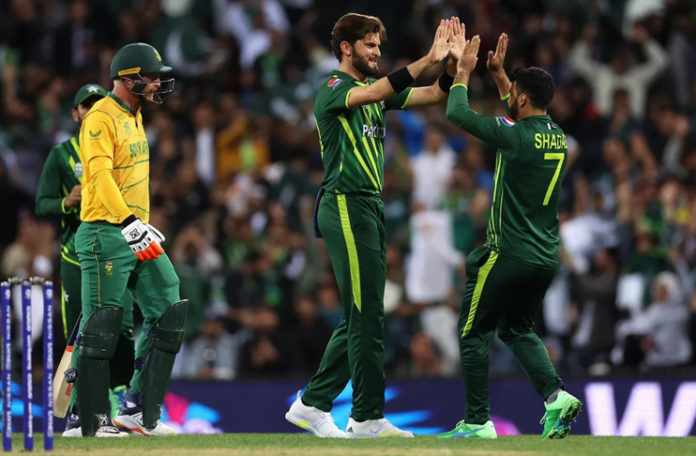 SYDNEY: Pakistan maintained their unbeaten T20 World Cup record against South Africa as the men in green outclassed the Proteas Men by 33 runs in a rain-hit Super 12s fixture on Thursday.

Set to chase a revised target of 142 runs in 14 Overs, South Africa fell 33 runs short as they could amass 108/9 in the allotted overs.

The Proteas men had a dismal start to the run chase as they lost two quick wickets for a mere 16 runs in the third over.

South African captain Temba Bavuma then attempted to counter-attack as he charged on Haris Rauf’s fourth over and took his side to 36/2.

Bavuma alongside Aiden Markram stitched a valiant 49-run partnership as South Africa got to 69/4 in nine overs.

Shadab Khan, however, jolted South Africa’s comeback in the first three deliveries of his first over as he removed both set batters Bavuma and Markram in a span of three deliveries.

Bavuma remained the top-scorer for his side with a quick knock of 36 runs in just 19 balls, laced with four boundaries and a six, while Markram scored 20 off 14.

The all-important match, however, was interrupted due to rain and consequently, reduced to 14 overs with a revised target of 142; leaving South Africa to chase 77 runs in five overs.

Heinrich Klaasen and Tristan Stubbs resumed the run chase for their side and could add 29 runs in 11 deliveries before Shaheen Shah Afridi broke their partnership by removing the former on 15.

Following his dismissal, the side then ran into a frustrating collapse and kept losing wickets at regular intervals, which resulted in them struggling to score just 108/9 in 14 overs.

Shaheen led the bowling attack for Pakistan with 3/14, while Shadab bagged two wickets. Naseem Shah, Haris, and Mohammad Wasim Jr made one scalp each.

Allrounder Shadab and Iftikhar combined excellently for a quickfire 82 in 36 balls as they rained boundaries and completely dominated the South African bowling attack between the 14th and 19th over.

Shadab showed great muscles as he hit four cracking sixes and three fours to race to his fifty in just 20 balls. Iftikhar, on the other hand, had a phenomenal outing with the bat too as he raised 51 off 35 laced with three fours and two gigantic sixes.

Opting to bat first, Pakistan had a dismal start to their innings as opener Mohammad Rizwan was struck down in the very first over by Wayne Parnell. No 3 batter Mohammad Haris, who replaced the injured Fakhar Zaman in the playing lineup, played a brilliant cameo of 11-ball 28 as he thrashed the Proteas pacers for three sixes and two fours.

South Africa, however, rebounded in the 5th over when Anrich Nortje plummed dangerous-looking Haris before Lungi Ngidii got rid of out-of-form skipper Babar Azam in the very next over.

Babar’s slump with the bat continues as he failed to reach the double figures fourth consecutive time in the tournament.

Left-handed batter Shan Masood (2 off 6) also met a similar fate when he lobbed the Nortje’s delivery straight into the fielder’s hands at mid-off, ending his brief stay on the crease.

Following Shan’s dismissal in the 7th over, Mohammad Nawaz and Iftikhar anchored the innings with a strong 52-run partnership before left-arm wrist spinner Tabraiz Shamsi took down the left-handed batter in the 12th over.

No 7 batter Shadab then led the charge along with Iftikhar with their blistering knocks and took the team to a comfortable position.

Nortje, however, took two wickets on the last two balls of the penultimate over as he dismissed Shadab and incoming batter Mohammad Wasim. Meanwhile, Rabada also made two scalps in the final over as Pakistan went for an all-out attack in the death overs.