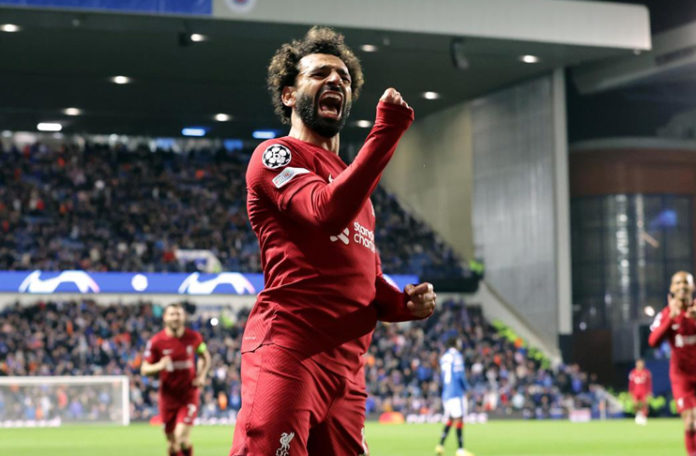 GLASGOW: Jurgen Klopp said the mood around Liverpool had been lifted after Mohamed Salah came off the bench to score the fastest hat-trick in Champions League history in a 7-1 demolition of Rangers at Ibrox on Wednesday.

The Reds had won just four of their first 11 games of the season and fell behind for the eighth time this campaign when Scott Arfield fired the Glasgow giants into an early lead.

But Rangers are being schooled on their return to the Champions League for the first time in 12 years as they crumbled to a record-equalling European defeat in the second half.

The Glasgow giants remain without a point and have conceded 16 goals in four games.

“The first half and the last half an hour was night and day,” said Van Bronckhorst. “I cannot explain it.

“The performance was not the way we want to represent this club.”

Roberto Firmino’s double on either side of half-time turned the game around before the Brazilian teed up Darwin Nunez to kill off the contest.

Klopp had left Salah, Thiago Alcantara and Diogo Jota on the bench with one eye on Sunday’s clash against Manchester City in the Premier League.

But they were brought on in the final quarter and Salah did not miss the chance to cash in against a beleaguered Rangers defence.

The Egyptian’s treble arrived in just six minutes and 12 seconds to beat the previous record held by Bafetimbi Gomis in Lyon’s 7-1 win over Dinamo Zagreb in 2011.

“It changes the mood definitely, and that’s good,” said Klopp. “We all know who is coming on Sunday. That will be different, but it’s better to go in with the feeling from tonight.

“When we play to our potential we’re a pretty good football team. That’s what we showed tonight.”

Harvey Elliott rounded off the scoring on a sobering night for a Rangers side that only months ago reached the Europa League final.

A draw in Amsterdam will suffice for Liverpool to reach the last 16 when they face Ajax in two weeks’ time.

But Napoli remain out in front in Group A after a 4-2 win over Ajax sealed their place in the knockout stages.