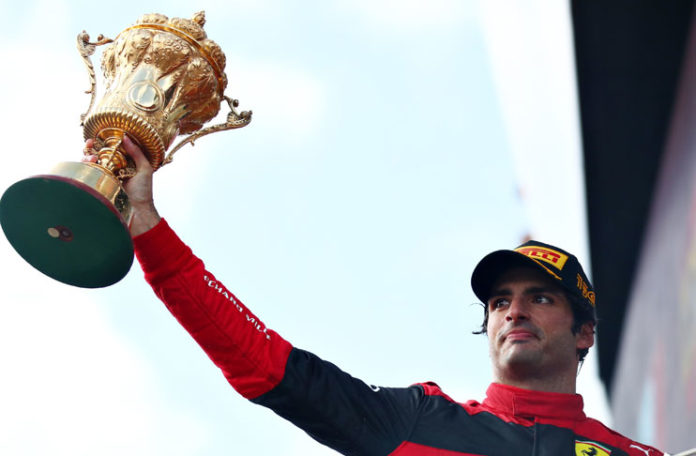 SILVERSTONE: Carlos Sainz secured his first Grand Prix triumph in the 150th race of his career by leading his Ferrari to the finish line in the frantic and crash-filled British Grand Prix on Sunday.

The Spaniard, starting from his maiden pole position, earned in the qualifying on Saturday, moved further as he displayed brilliance in a furious race to claim his maiden GP victory.

Sainz kept Sergio Perez of Red Bull at the bay and displayed astounding resilience to retain his dominant lead before taking the flag 3.7 seconds prior to the latter. Perez, however, finished second after an impressive race of his own.

Mercedes’s Lewis Hamilton looked to have revamped in the ongoing season as he finished at the podium after finishing ahead of the former championship leader Charles Leclerc.

The current championship leader Max Verstappen, on the other hand, had a race to forget as he found himself nowhere near the front for the majority of the race as his tyres gave him problems, which resulted in him pitting for too long. The Red Bull’s driver finished seventh.

The proceedings were off to an unwanted start when Guanyu Zhou got involved in a terrifying collision that caused his car to flip, slide across the run-off area upside-down, and crash into the barriers on the second corner.

After Guanyu #Zhou's #car flipped over and landed between the barriers at the #British #Grand #Prix #today, George #Russell (who had also crashed) left his car and ran to help him. Russell gave up the race on lap 1 to help Zhou and DNF'ed. pic.twitter.com/LHmufrlwyt

However, the Alfa Romeo driver was extricated from the vehicle and is now fine. As a result of the incident, the race was delayed and restarted an hour later.

Following the conclusion of the British GP, Ferrari cut Red Bull’s lead to 63, while Mercedes remained in third.