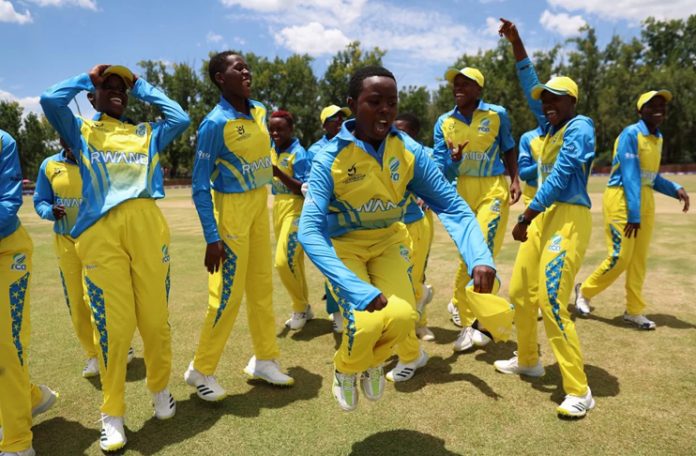 POTCHEFSTROOM: Rwanda’s Henriette Ishimwe returned with splendid figures of 4/13 to aid in her side’s astounding triumph over Zimbabwe by 39 runs in the Group B fixture of the ongoing ICC Under-19 Women’s T20 World Cup.

Set to defend a mere 120 in the allotted 20 overs, Rwanda’s bowlers script an astonishing comeback to bundle out Zimbabwe for a paltry 80 runs.

Despite a shaky start, Zimbabwe at one stage were 60/2 in pursuit before losing the remaining eight wickets for just 20 runs.

Notably, eight Zimbabwean batters failed to amass double figures while half of them perished for a golden duck.

Henriette led the bowling attack for Rwanda with four wickets while Zurufat Ishimwe bagged two. Gisele Ishimwe, Rosine Irera and Geovanis Uwase, on the other hand, made one scalp each.

Put into bat first, Rwanda too, had a dismal display with the bat as they could only amass 119/8 in the allotted overs.

Chipo Moyo was the pick of the bowlers for Zimbabwe as she claimed three wickets while Kudzai Chigora bagged two.

It is pertinent to mention that current Rwanda’s side are the first team to represent the country at a cricket world cup.

Meanwhile, in the Group C fixture of the mega event, dominant New Zealand thwarted Ireland by nine wickets with 79 balls to spare.

After opting to bat first, the Irish batting lineup endured a ruthless attack by the Kiwi bowlers which bundled them out for a skimpy 74 runs.

Zara Craig (20) and Abbi Harrison (14) offered a brief fightback with their 21-run partnership but could not stretch their stand.

Besides the duo, the rest of the Irish batters failed to amass double figures.

Natasha Codyre was the pick of the bowlers for New Zealand with 3/6 while Tash Wakelin claimed 2/12. Kayley Knight, Olivia Anderson and Abigail Hotton struck out a batter each.

In response, New Zealand eased through the pursuit in the seventh over after losing just one wicket.

Anna Browning top-scored for the White Ferns with a quickfire 29 off 14 deliveries before Antonia Hamilton (18) and Georgia Plimmer (17) steered the side to victory.