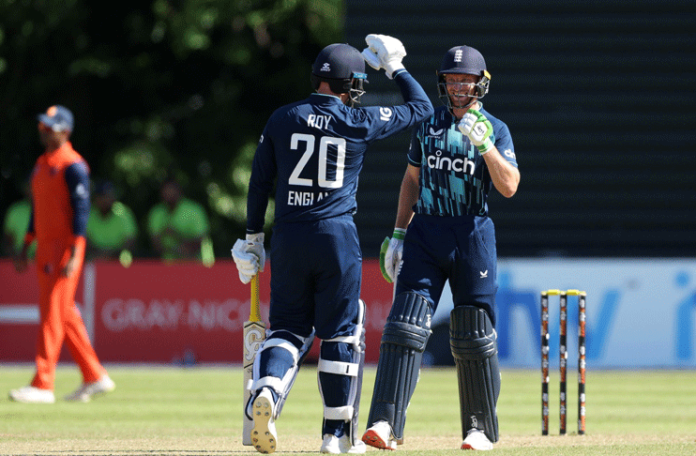 AMSTELVEEN: England’s explosive opener Jason Roy scored a blistering century to help the touring side chase down the 245-run target in the 30.1 overs and complete the clean sweep over the Netherlands.

Set to chase 245, England excelled to the victory by eight wickets and 119 balls to spare at the back of Roy’s unbeaten century.

The touring side were off to a flying start as the opening pair of Roy and Phil Salt was scoring at a rapid pace; allowing the side to amass 80 runs in just the 10th over.

Salt, on the other hand, who was eyeing his half-century, fell one short of it as Paul van Meekeren castled the former, who scored 49 off 30 balls, laced with nine boundaries.

The touring side, lost another wicket in the 10th over as Dawid Malan bagged a two-ball duck and as a result, slipped to 85/2 in 10 overs.

Roy then joined hands with the interim captain Joe Buttler and put on an unbeaten 163-run partnership to steer the side to the victory in the 31st over.

Roy top-scored for the side with his century and remained not-out on 101 off just 86 deliveries, laced with 15 boundaries. Buttler, on the other hand, remained unbeaten with his blistering half-century knock of 86 off just 64 balls with the help of seven boundaries and five sixes.

For the Netherlands, van Meekeren was the only bowler to find success and made two scalps, which came in the same over.

Batting first, the English bowlers completely dominated the Dutch batting line-up; bowling them out for 244 in the 50th over.

Max O’Dowd, Bas de Leede, and Scott Edwards led the way with half-centuries but were a touch too slow as their knocks could not bolster the home side to a defendable total.

The rest of the batters had no answers to the strong English bowling attack and fell after scoring cheaply. Tom Cooper was the other batter, who made a significant contribution as he scored 33.

For England, David Willey led the way with four wickets, while Brydon Carse picked two. David Payne, Liam Livingstone, and Adil Rashid made one scalp each.

Following their clean sweep victory over the Netherlands in the series, England have replaced Bangladesh from the top of the ICC ODI World Cup Super League.

READ: Shan to lead Derbyshire in a warm-up match against India on July 1