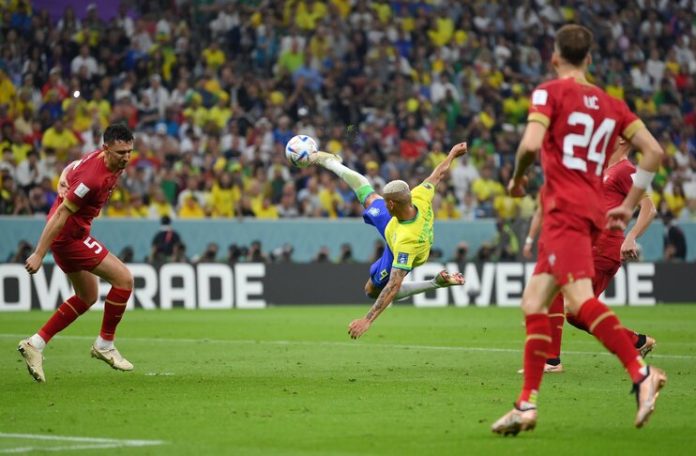 LUSAIL: Five-time champions Brazil marked a perfect start to their FIFA World Cup 2022 campaign as they outclassed Serbia 2-0 in the Group G clash at Lusail Stadium here on Thursday.

Tournament favourites Brazil announced themselves in the ongoing FIFA World Cup with a bang as they blew away Serbia to start their campaign with a convincing victory.

The record five-time winners had a sloppy first half as they toiled at times but recovered well after the break and retained their dominance over Serbia.

Tite’s side’s dominance then soon rewarded Brazil when Richarlison fired the opener in the 62nd minute.

Neymar Jr initiated the expedition for the breakthrough as he did well to dodge several Serbian defenders in the box before passing the ball to Vinicius Jr who fired a powerful strike from the left but it was saved by Serbian goalkeeper Vanja Milinković-Savić only for Richarlison to hit on the rebound into the nets.

Following the assist from Vinicius, Richarlison then struck in the 71st minute to double Brazil’s lead courtesy of an astounding acrobatic effort and placed a flying bicycle kick to perfection.

Following this victory, Brazil managed to extend their brilliant record in the group stages of the world cups as the former champions last suffered a setback in 1998 against Norway when they had already booked their berth into the next round.

The victory over Serbia also powered them to the top of Group G standings ahead of Switzerland, who edged Cameroon 1-0 earlier in the day, while Serbia sank to the bottom.