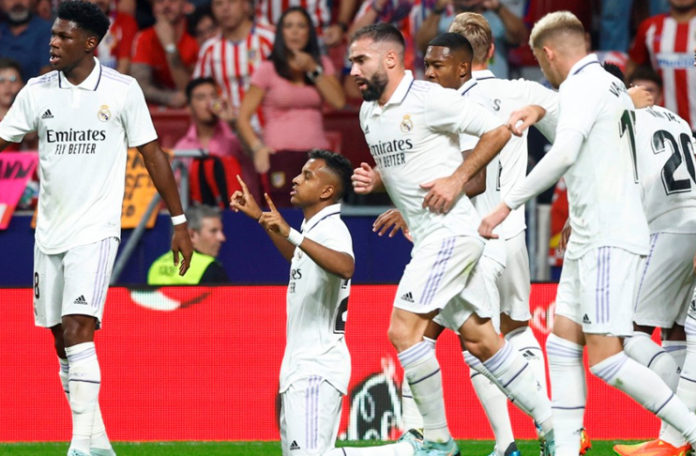 MADRID: Real Madrid cruised past Atletico Madrid 2-1 in an exciting city’s derby on Sunday to maintain the 100 per cent success rate in the ongoing season and reclaimed their two points lead over Barcelona.

Real Madrid won straight six opening games for the first time after 1987-88 to bolster their chances of LaLiga title defence.

A dominant display in the first half thanks to the strikes by Rodrygo and Federico Valverde put Real in a commanding position over the home team.

Mario Hermoso retaliated with a late consoling goal for the hosts but they were unable to find an equaliser.

Rodrygo opened the scoring for Real in the 18th minute after a bright start from his side. They double their lead in the 36th minute as Valverde touched the ball into the nets after Vinicius Jr’s shot hit the post.

With the win, Real Madrid regained the top spot in the standings with 18 points while Barcelona slipped to the second after a brief stay at top following a 3-0 win against Elche on Saturday.

Real Betis edged past Girona 2-1 and secured the third spot in the standings thanks to the brace by Borja Iglesias.

Real Sociedad beat Espanyol 2-1 after a thrilling first-half battle between both sides at Anoeta Stadium on Sunday.

Getafe earned a surprise win over Osasuna as they thumped the home team 2-0 to claim their second win of the season.

Meanwhile, Seville and Villareal ended on a 1-1 draw in another game of matchday 6 on Sunday.

READ: ‘Proud moment for me, my family to lead England in Pakistan’ says Moeen