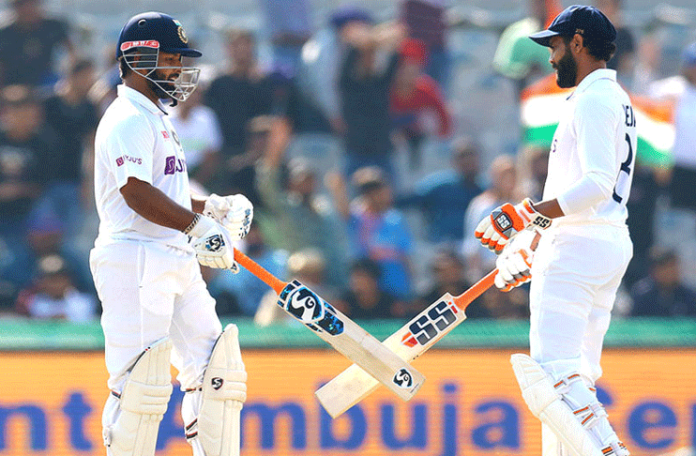 MOHALI: India’s wicket-keeper batter Rishabh Pant missed out on his well-deserved hundred by a mere four runs but the home side piled up 357/6 on the first day of the first Test against Sri Lanka, here on Friday.

The left-handed batter Pant, who scored a quick 96 remained unlucky to reach a triple-figure mark as Suranga Lakmal cleaned him up with a brilliant delivery. The left-hander scored 96 off 97 balls with the help of nine boundaries and four sixes and put his side into the commanding position.

Earlier, after opting to bat first, Indian openers Rohit Sharma and Mayank Agarwal provided a solid foundation to the home side with a brilliant 52-runs partnership for the first wicket. Rohit, who was accelerating his innings quickly, perished after scoring 29 off just 28 balls; smashing six boundaries.

Mayank, too, soon perished after putting on a brief 38-runs partnership with Virat Kohli. He scored 33 off 49 balls, laced with five boundaries.

Virat then recorded an important 90-runs partnership with Hanuma Vihari. The former captain, who was playing his 100th Test match, appeared confident to reach his much-awaited 71st century, perished after Lasith Embuldeniya castled him on 45. The right-handed batter also hit five boundaries.

Following his departure, Vihari also walked back to the pavilion after scoring a magnificent half-century. The young batter scored 58 off 128 balls, laced with five boundaries.

Ravichandran Ashwin and Ravindra Jadeja then made sure that the side do not lose further wickets as the pair put on an unbeaten 25 runs partnership before the stumps on the opening day.