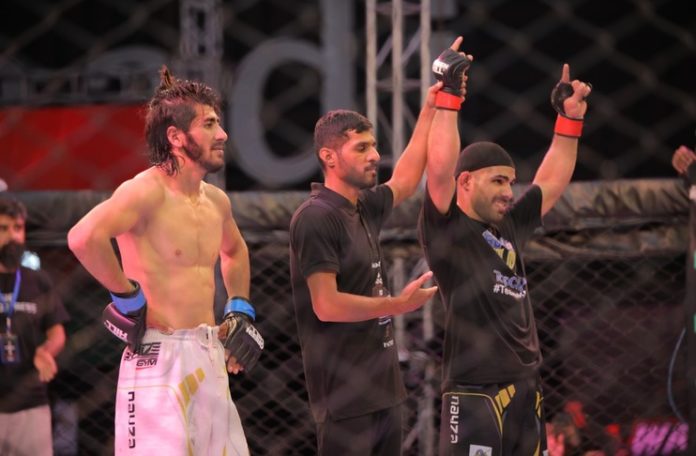 LAHORE: Pakistan fighter Zia Mashwani pushed his Afghan opponent Amanaullah Eymaq to the limit before putting an end to his unbeaten run by handing a crushing defeat to the latter in the main event of Nayza ARY Warriors 2.

In the most-awaited fight of an eventful night, Mashwani produced an astounding feat as he defeated The Hunter Eymaq – the first defeat of his Mixed Martial Arts (MMA) career.

Known for his aggressive approach, Eymaq had to deal with the patient Mashwani, who dominated the first round by choking the latter in the corner.

Following this, Mashwani became the first fighter to push Eymaq to the second round.

Zia Mashwani showed an impressive game and takes home the victory against Amanullah Eymaq, proving his mettle as a professional MMA fighter that always brings his best game to the ring.

The next two rounds followed the same procedure as Mashwani continued his domination over Eymaq with his patience and resilience, grappling and choking the Afghan fighter for the majority of the match.

In another match, Aqib Awan took an unforgiving opponent from Iran – Yasin  Sadollahi – in a spirited match to prove their valour. The two wrestlers pushed each other to their limits and gave it their all but, in the end, Awan emerged victorious.

In an all-Pakistan clash between Azeem Khan and Ameer Hamza in the Featherweight category, the two fighters displayed great resilience and striking ability and pushed each other really hard in a fight, that could not separate the two fighters before the official result saw Azeem claiming the victory.

An unforgettable fight with two players that didn't hold back and Azeem Khan secured the winning position.

A match like this is what makes MMA fans seek the thrill of the game!

Shehzadi Sakhi and Ummul Banin competed in the first female battle of the evening in the strawweight division. Shehzadi, who was looking for vengeance after losing in the first season of ARY Warriors, gave it her all in the ring this time, and she triumphed over Banin in a thrilling contest.

The Atomweight contest included women’s combatants Rohan Pari and Tuba Aziz, who tested each other’s hustles with brutal striking and difficult grappling. Rohan did not hold back, however, and sealed an important victory for her career.