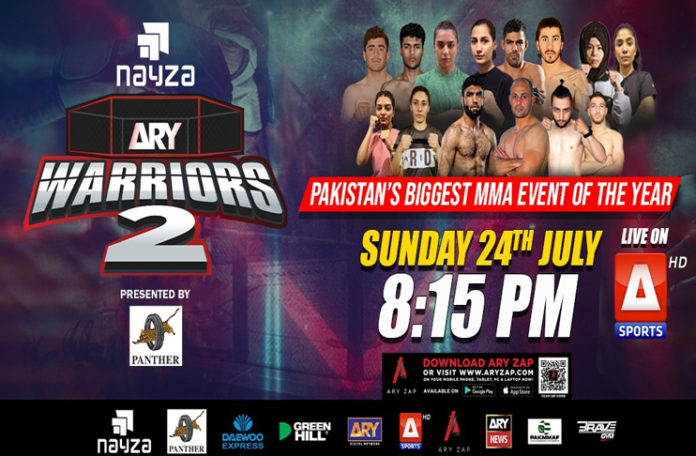 Bahrain-based Muhammad Abbas Khan, gold medalist at the 2018 IMMAF Africa Open Championship, and Mohamed ElDwansy of Egypt will headline the biggest MMA event in Pakistan with the welterweight bout.

Zia Mashwani, widely considered one of the best talents to come out of Pakistan’s MMA circuit, will take on the Afghan fighter Amanullah Eymaq. Another top prospect from Pakistan – Aqib Awan, on the other hand, will take on Iran’s Yasin Sadollahi. Eman “Falcon” Khan, the first female competitor from Pakistan to ever compete at the IMMAF World Championships, will battle Sumaira Parveen in a thrilling kickboxing bout.

Speaking ahead of the commencement of the biggest MMA event in Pakistan, ARY Digital Founder and Chairman Pakistan MMA Federation, Mr Salman Iqbal expressed his delight over the continued growth of the MMA in the country, while also announcing that the event will be bigger and better this year.

“It gives me great pleasure to see Pakistan’s MMA circuit growing every year. This year, the ARY Warriors fight night is bigger and better as it features international fighters and HD TV coverage on A Sports HD,” Mr Salman stated.

“The ARY Group has always been at the forefront to promote sports in Pakistan and this event is a continuation of our efforts. I wish all the fighters the very best of luck and I am sure they will put on a great show,” Mr Salman added.

The fight night will be held in Packages Mall here, one of the city’s busiest hubs. In order to deliver thrilling action to as many fans as possible, entry will be free for all fans.